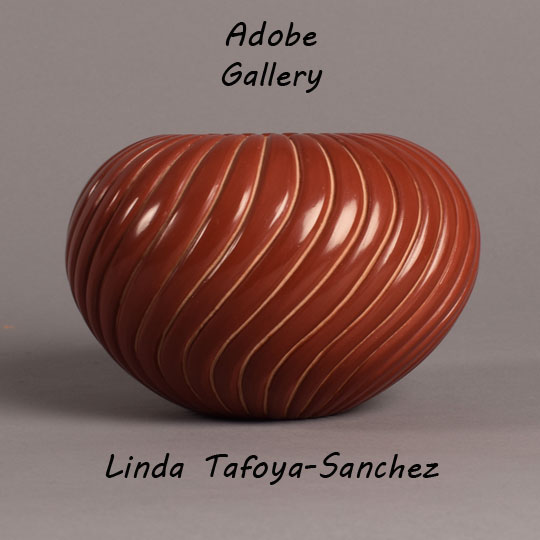 The shape and carving of the swirls on this melon jar are graceful in their uniformity.  The hand-carved curves evenly expand as they move down the exterior of the jar—as if it is a flower or otherwise naturally occurring geometric pattern.  The curves and grooves have been expertly hand rock-polished, and extreme care was taken in application of the alternating slip colors of brick red and tan.  This melon jar is as pleasing to the hand as it is to the eye—with a heaviness that grounds the shape with perfection.

Linda is an award-winning Tewa potter and her accomplishments have been recognized by awards from Santa Fe Indian Market, Heard Museum Guild, Eight Northern Indian Pueblos Arts and Crafts and others. She was selected by the State of New Mexico to make a pottery vessel for presentation to the Prince of Spain.

Provenance:  this Santa Clara Pueblo Melon Jar by Linda Tafoya-Sanchez is from the estate of Henry Christensen III, former attorney at law of New York City to whom we sold this in 2011.