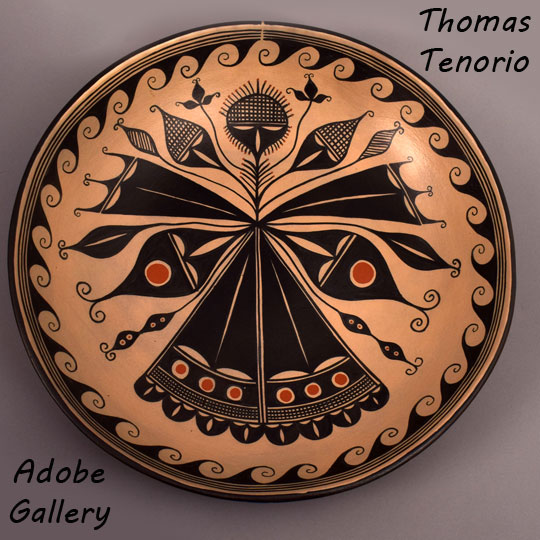 This large, impressive piece of pottery was made by Santo Domingo Pueblo artist Thomas Tenorio.  It’s a wide, shallow bowl, with an intricate and expressive design that we have never seen before.  Its walls curve upward gently, making their way to about a third of the height we’d expect of a large dough bowl.  Its base is red, as is typical of Santo Domingo pottery.  The primary designs are completed in a modern-looking application of the black-on-cream look that has been used at Santo Domingo for centuries. The bowl’s interior features a wonderful composition.  Using traditional Santo Domingo design patterns and a variety of leaf, stem, and bulb elements, Tenorio fashioned an image that might be interpreted as a many-armed figure.  We see a clear face, many sets of arms in symmetrical pairs, and a large triangular element that looks like a robe or skirt.  Whatever the artist’s intent might have been, it is a striking image, and it’s even more impressive when one considers that it’s composed mostly of gentle plant designs. This is a wonderful example of contemporary Santo Domingo pottery.

The bottom of the bowl is signed and dated Thomas Tenorio, Kewa N.M. 2010.

Thomas Tenorio (1963- ) is of the Aguilar family from Santo Domingo Pueblo.  He generally makes very large pottery jars and bowls, but apparently, early in his career he made miniatures as well.  Tenorio learned the art of pottery making by interviewing potters, reading books and by trial and error.  For smaller pottery, he fires outdoors in the traditional manner, but for larger pottery he fires in a kiln similar to the outdoor bread ovens.  His larger pottery is therefore protected from wind and fires without fire clouds.

Provenance: this Massive Kewa Pottery Bowl with Intricate Designs by Thomas Tenorio is from a private California collection