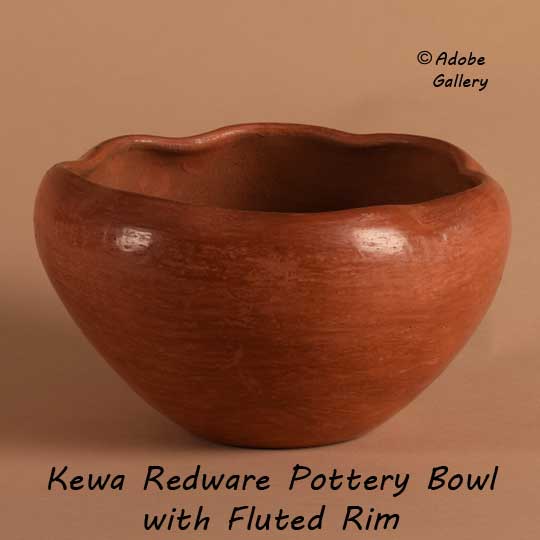 For this unsigned redware bowl, we chose to make an attribution that might seem unexpected for a piece like this: Santo Domingo Pueblo.  An old slip of paper that was inside the piece when it came to us reads “piece from Santo Domingo Pueblo.”  We see mislabeled artworks often and have learned not to immediately accept labels and markings as correct, but there is further evidence pointing towards Santo Domingo.  It is the bowl’s shape that leads us to believe that the piece was made by a Santo Domingo artist who preferred the simple beauty of redware pottery.

At about six inches in diameter and four inches in height, it is a bit thinner and deeper than the average chili bowl.  Slow, subtle waves of clay form its fluted rim, making a total of seven repetitions around the rim’s circumference.  The red tone seems well-suited to the vessel’s form.

Condition: structurally sound with some abrasions and scratches.

Provenance: this Kewa Redware Pottery Bowl with Fluted Rim is among several that were collected by Mary Louise Mark (1878-1972) of Westerville, Ohio who was a Professor of Sociology and Statistics at Ohio State University.