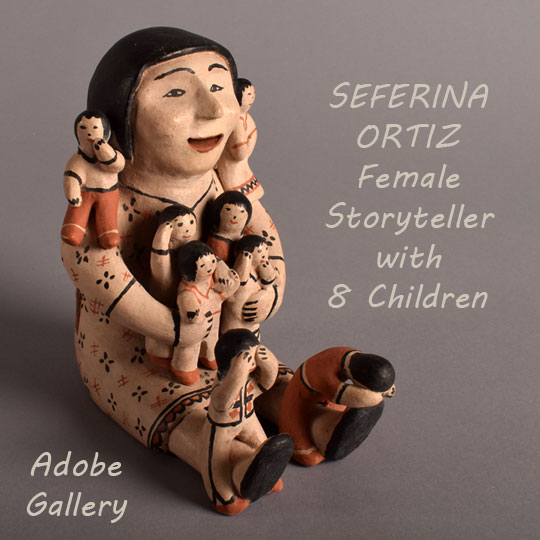 This pottery storyteller figurine by Cochiti Pueblo artist Seferina Ortiz is wearing a beautifully painted dress with a floral pattern.  It’s still fresh and pressed even with eight children all over her.  And, she has a warm and happy smile on her perfect face.  She looks like a happy grandmother. The children are wonderful, too.  They appear to be attentive and not distracted with toys.  The two boys on her lies appear to be the oldest of the group, based on their sizes.  They may be playing hide-and-seek.

Seferina (1931-2007) is considered one of the matriarchs of the potter population of Cochiti Pueblo.  Not only did she leave a legacy of her pottery, she left a legacy in her children—Joyce, Janice, Inez, Virgil, Leon and Angie, some of whom are considered top potters today.

Provenance: this SEFERINA ORTIZ Pottery Female Storyteller with 8 Children is from the collection of a gentleman from Albuquerque