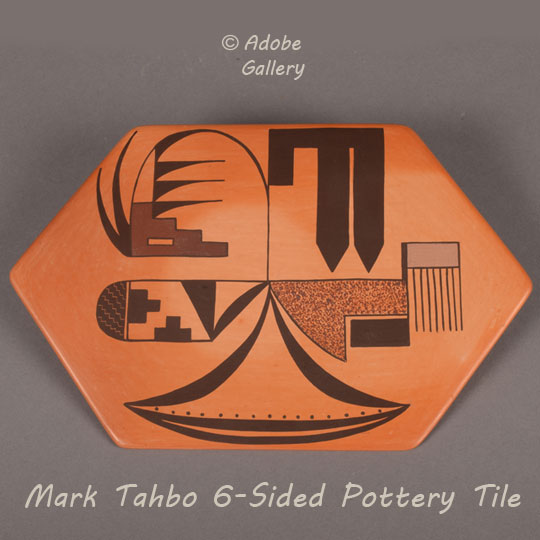 This large, six-sided pottery tile was created by notable Hopi-Tewa potter Mark Tahbo. The piece was originally brought to Adobe Gallery by the artist during the 2017 Santa Fe Indian Market. During his visit, Tahbo shared a piece of information that we found fascinating: making flat tiles like this one was, for him at least, often more challenging than making more common forms like seed jars. The high level of difficulty came from the likelihood of these flat pieces breaking while drying or being fired. Another interesting bit of information was that the drying process was completed by sandwiching the tile between two thick books.

That the tile-making process is so challenging makes this piece all the more impressive. It is a large, six-sided tile, and there are no flaws in its form. The design can be interpreted as having four distinct quadrants. It may be viewed in any rotation, as there is no "correct" top or bottom. If the twin lines in thick black are arranged to be in the lower left, then there is an abstract bird in lower right, a tubular design with squiggles under the dome, a geometric design in upper left where the gray rectangle sprouts parallel lines. In this position, the whole tile is under what appears to be a cloud with drops of rain ready to fall.

The back of the tile is signed with Tahbo's Tobacco Clan signature and dated ‘17'. A wood display stand is included.

Provenance: this Six-Sided Polychrome Pottery Tile by Mark Tahbo was acquired by Adobe Gallery from the artist in 2017, sold to a New Mexico collector who is now downsizing