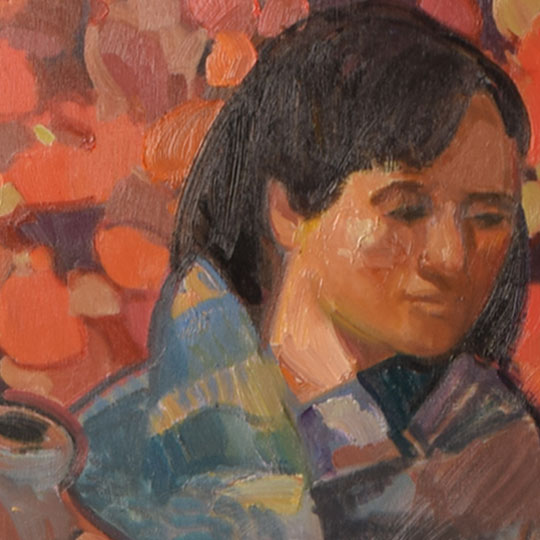 This original oil painting, titled “In Rouge,” was created in 2020 by artist Francis Livingston.  It is a wonderful example of a Western artist presenting Native imagery through a lens that is both sensitive and unique.  Livingston’s subject here is a Native woman carrying a pot.  Though the details are pleasantly abstracted, the pot’s form and design remind of us of prehistoric Pueblo wares.  The woman wears a colorful patterned blanket over a traditional dress and moccasins.  She turns her head to her left, engaging with someone or something, and allowing the viewer to see her face in its entirety.

In this painting, Livingston’s skill with light and color transforms a snapshot of everyday life into something extraordinarily beautiful.  Sunlight covers the right side of the woman’s body.  Her left side is shadowed, creating muted pastel tones in her patterned blanket.  These blue, pink, purple and white colors complement one another wonderfully.   In the background, a smattering of autumn leaves provides a burst of bright color, drawing the viewer’s eyes up to the woman’s face.  At nearly four feet in height, “In Rouge” is a large painting, and its size certainly works in its favor.  It’s a subtle but powerful image with a graceful, elegant feel. We are pleased to have the opportunity to study it and present it to our readers.

The painting is signed Livingston in lower left.  It is framed in a handmade carved wood frame with gold stain.  With their identical sizes, identical frames, and similar compositions, this painting and Livingston’s “In Yellow” would make an excellent pairing.

Francis Livingston (1953- ) is an American painter.  Livingston was born in Cortez, Colorado.  He studied at Rocky Mountain College of Art and Design in Denver, and then moved to San Francisco to study and eventually teach at the Academy of Art University.  He lived and worked in San Francisco for 20 years before relocating to Idaho, where he began exploring Western themes and imagery.  His works have been widely published, and he has received many notable awards and prominent commissions.  His work is often referred to as being reminiscent of the Taos Founders.

Condition: this Original Oil Painting titled "In Rouge" by Francis Livingston is new

The Art of HOWARD TERPNING [SOLD]
by