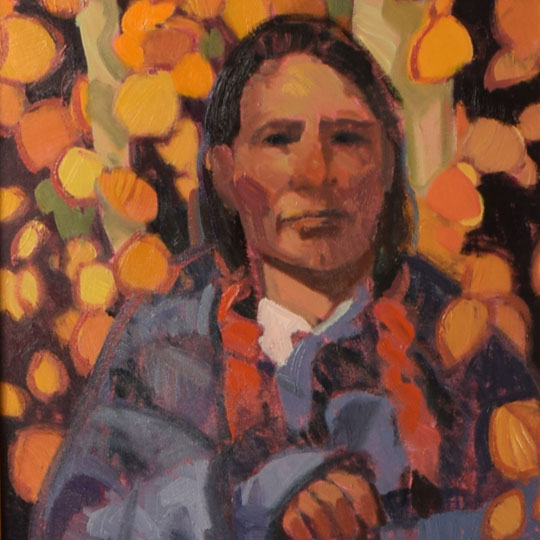 This wonderful original painting by artist Francis Livingston is titled “In Yellow.”  It was created in 2020.  It is a bold, vibrant and beautiful depiction of a Native American man standing among aspen trees.  He faces the viewer directly, as golden leaves fall on and around a blanket worn over his shoulders.  His pants and moccasins peek out from beneath the long blanket, which is made of rich blues, purples and pinks.  Two aspen tree trunks rise up behind the man.  They’re set against a black background, creating a strong contrast against the brilliant yellow leaves.

Livingston’s works use color to convey depth and dimension in a particularly effective way.  Livingston’s subject here has a face that feels full of life despite being made without much in the way of detail.  Rather, the artist used careful touches of bright colors to define the sun-kissed edges of the man’s forehead and certain defining lines on his cheeks and sharp jawline.   A harmonious blend of purple and pink tones fills in the sunken, shadowed areas, while deep-set black eyes stare directly into those of the viewer.  “In Yellow” is an excellent offering from Francis Livingston.

The painting is signed Livingston in lower left.  It is framed in a handmade carved wood frame with gold stain.  With their identical sizes, identical frames, and similar compositions, this painting and Livingston’s “In Rouge” would make an excellent pairing.

Francis Livingston (1953- ) is an American painter.  Livingston was born in Cortez, Colorado.  He studied at Rocky Mountain College of Art and Design in Denver, and then moved to San Francisco to study and eventually teach at the Academy of Art University.  He lived and worked in San Francisco for 20 years before relocating to Idaho, where he began exploring Western themes and imagery.  His works have been widely published, and he has received many notable awards and prominent commissions.  His work is often referred to as being reminiscent of the Taos Founders.

IN CONTEMPORARY RHYTHM – The Art of Ernest L. Blumenschein [SOLD]
by

MASTERWORKS OF THE TAOS FOUNDERS [SOLD]
by Author Unknown