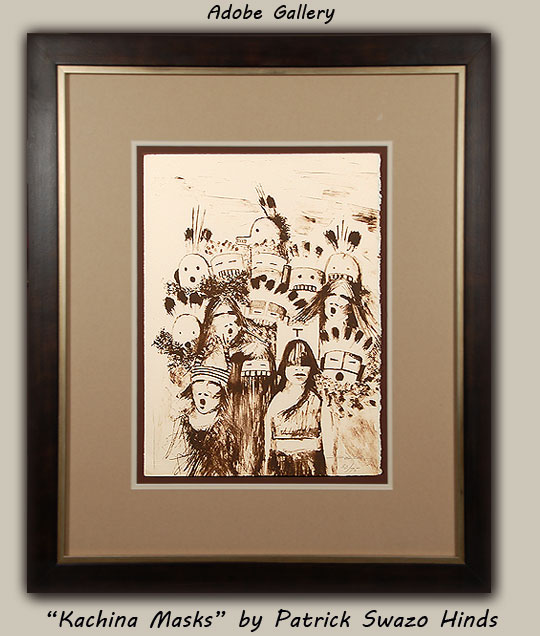 The year 1964 was a turning point in the art career of Patrick Swazo Hinds.  It was the year that he began to explore his Indian heritage in art expression.  He continued painting non-Indian subjects as well but began a new direction that would make him a famous Native American artist—the most famous artist of any medium from Tesuque Pueblo.  He was immediately selected in 1964 for his first one-man show at the Heard Museum in Phoenix, AZ.  This was only the first of many exhibits.

Swazo Hinds executed a dozen stone lithographs at Tamarind Institute of the University of New Mexico in Albuquerque during his career.  This is one of those.  It is number 50 of 75 in the edition and was executed in 1974 in brown ink on buff Arches paper.  Four lithographs in this set were printed together on a single sheet of paper, then the four were separated by tearing the paper apart, thus leaving the deckled edges. The image was printed in brown on stone.  The printmaker on this project was Ben Q. Adams.  These four lithographs were the last ones executed at Tamarind before Swazo's untimely death at age 50.

Official documentation from Tamarind Institute is provided with purchase of the lithograph.

Condition: this Stone Lithograph "Kachina Masks" by Patrick Swazo Hinds is in original excellent condition.  It has been framed using all acid-free materials and a strong and bold dark brown frame.  The paper was floated so that the deckled edges are exposed and none of the paper is under matboard.

Provenance: ex. coll. Native American artist to whom this was a gift.

Recommended Reading:  ART AND INDIAN INDIVIDUALISTS the Art of Seventeen Contemporary Southwestern Artists and Craftsmen by Guy and Doris Monthan