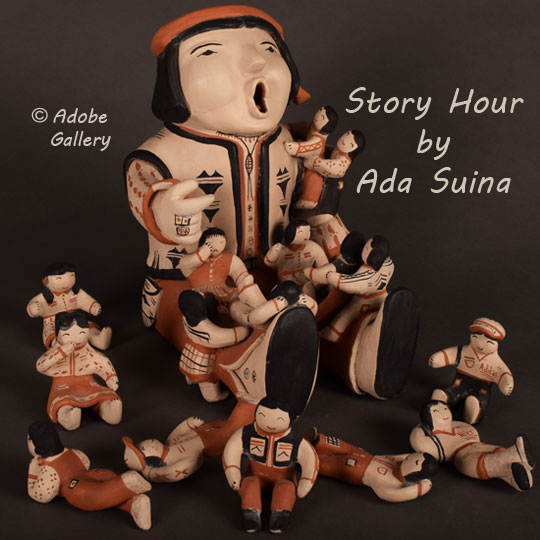 This delightful set of figurines was created by Ada Suina of Cochiti Pueblo. Helen Cordero, the original creator of the storyteller figurine, occasionally made pieces with the children sitting around the adult figure rather than adhering to the adult. She called these pieces "Story Hour" figurines. They are still considered storytellers, but she did designate them with this specific name. This particular set is the first Story Hour set we've handled by Ada Suina. With eight children attached to the main figure and an additional eight standalone figures, this set includes sixteen children in total.

Suina's work with this set is excellent by any measure. The figures' facial expressions convey warmth and merriment, which is typical of Suina's works but notable nonetheless. Much attention was paid to the details of the figures' clothing. Complex patterns and jewelry appear on the primary figure, who is dressed in traditional clothing. Suina made an unusual and delightful nod to the era during which these figures were created by dressing two of the children in modern athletic gear—one reclining child wears shorts, lace-up sneakers, and a Nike shirt; another wears an Adidas jersey with number 14 on the back and a cap with "Indians" written on the bill. The remaining figures, as well as those that are attached to the main figure, wear traditional clothing. All are smiling, and the scene is a pleasure to view.

The bottom of the main figure is signed and dated Ada Suina, Cochiti Pueblo, ‘85.

Ada Suina (1930- ) of Cochiti Pueblo is highly respected for her storyteller pottery figurines and nacimientos. She has always been recognized as one of the premier figurine potters at Cochiti Pueblo. Her storyteller figurines have strong, chiseled faces and happy expressions. She no longer makes pottery of any kind. Sadly, the white slip used by Cochiti potters is no longer available—the source has dried up. Rather than use the inferior slip that is available, some of the potters chose to no longer make pottery. Ada is one who chose to cease. Suina was born May 20, 1930, at Cochiti Pueblo, the daughter of Berina and Eluterio Cordero, sister to Stephanie C. Rhoades (Snowflake Flower). Her maternal grandmother Estefanita Herrera was instrumental in inspiring Ada to become a potter, and her cousin, Virginia Naranjo, taught her the intricacies of pottery making.

Condition: Very good condition. One of the children seated on the main figure's leg was separated and then reattached by a professional restoration artist