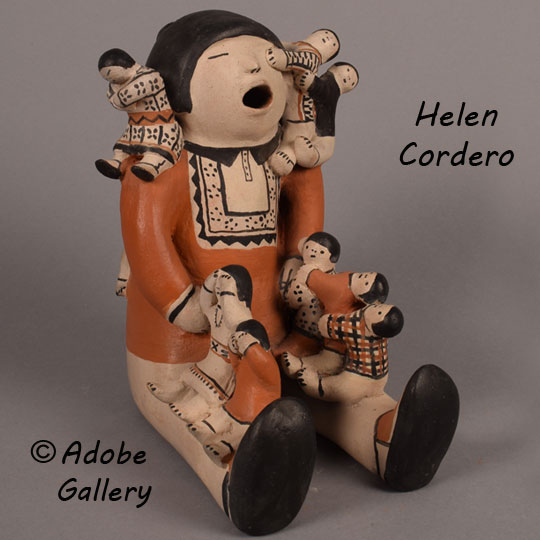 This impressive storyteller figurine was created by Cochiti Pueblo artist Helen Cordero. It likely dates to the 1970s, and it serves as a fine example of the work produced during this era. The main figure appears in the typical seated position, with eyes closed and mouth open. He wears traditional pueblo clothing and moccasins.

A total of nine children appear, climbing all over the main figure while listening to his stories. Two children, both covering their eyes, sit on his right leg. Three huddle together on his left leg. One appears on his right shoulder, and another clings to his back. Two more children appear on his left shoulder, with one reaching in and covering his eye—this is a unique, playful touch. Cordero did an excellent job with the details here, and the piece as a whole is quite impressive.

The bottom of the piece is signed Helen Cordero Cochiti. N.Mex.

Helen Cordero (1915-1994) was an influential Cochiti Pueblo artist. Cordero initially began her artistic career by creating beadwork and leather pieces, but was frustrated by the fact that most of the money earned from the pieces went back into buying supplies. She was taught how to make pottery by a family member, but was not satisfied with the quality of her bowls and jars, so she began making figurines. In 1960, notable folk art collector Alexander Girard noticed Cordero's work at a Santo Domingo Pueblo feast day, bought all of the available pieces, and commissioned more. Shortly thereafter, Girard commissioned what would be the first "Storyteller" figurine. In the years that followed, this style became incredibly popular and Cordero received many awards for her work. Cordero passed away in 1994.

Condition: good condition with overpaint on the right side of face and just below collar. Orange pigments have been painted over with a brighter orange.

Provenance: this Storyteller Figurine with Nine Children ca. 1970s is from a private collection