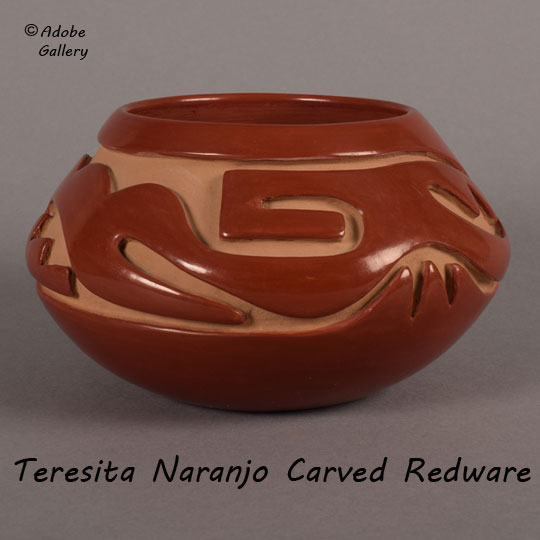 This carved redware modern pottery jar was made by Santa Clara Pueblo artist Teresita Naranjo. It's a low, wide jar that reaches its peak width at the midpoint of its height. It is gently rounded on the bottom and straight on the top, with a midpoint that curves sharply. The red slip is polished beautifully, covering the exterior and over the rim. The interior is coated with the red slip as well, though this area is unpolished. Naranjo decorated the jar with wonderful carved designs. Two carved horizontal lines circle the jar, occasionally curving away from their otherwise straight paths to form additional design elements. The viewer might see rain clouds, kiva steps, and lightning designs within these elements. Additional designs recall those that might be attached to an avanyu. There is no clearly depicted head or tail, but one can find an abstracted avanyu in these designs. Naranjo's work here is of the high quality that collectors expect of her work.

The bottom of the jar is signed Teresita Naranjo, ‘Apple Blossom,' Santa Clara Pueblo. Three photographs of the artist holding the jar are included with purchase.

Teresita Tafoya Naranjo (1919-1999) Apple Blossom - Bay-Po-Vi has been acknowledged as one of the finest 20th century potters at Santa Clara Pueblo. She was born in 1919 and passed away on January 2, 1999, at her home at Santa Clara Pueblo. Her unexpected death was a loss to all pottery collectors. Naranjo was the daughter of Victor and Christina Naranjo and wife of Joe Naranjo, mother to Stella Tafoya Chavarria, niece to Margaret Tafoya, and the granddaughter of Sara Fina Tafoya. After her husband's passing in 1950, she supported her family solely through sales of her pottery. She was a master potter—one of the finest of her pueblo—and was active from 1935 to 1999. She was known for her intricately carved blackware and redware in the Santa Clara style.