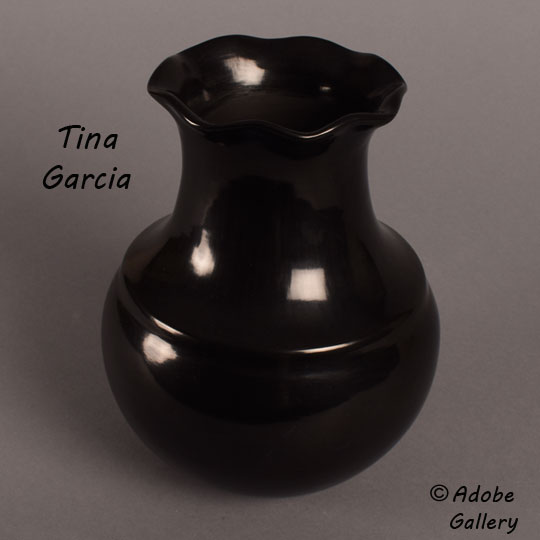 This polished blackware pottery jar was created by Tina Garcia, an artist with roots at both Santa Clara and Ohkay Owingeh. We have handled many of Garcia's pots over the years, and each one has been excellent. Technical skills and reverence for traditional forms are apparent in each of her offerings. The smooth surfaces of Garcia's jars reflect and interact with the light around them in a beautiful way, offering much to the viewer who chooses to look closely.

This piece is a somewhat modern-looking version of a traditional Tewa shape. Its round body claims about half of its height, curving upward to meet a sharply raised shoulder. From there, a tall neck rises to a fluted rim. There is no additional decoration, and none is needed. The beauty of the piece lies in the elegance of its form and the glow of its highly polished surface. Adding to the beauty is the fact that the jar is in impeccable condition, without a single scratch or abrasion to speak of. It looks as though it could have been made yesterday. This is a beautiful piece of polished blackware.

The bottom of the jar is signed Tina Garcia, San Juan & Santa Clara.

Tina Garcia (1957 - 2005) was the granddaughter of Severa Tafoya. Her mother was from Santa Clara Pueblo and her father from Ohkay Owingeh. She learned pottery making from her grandmother and her aunt, Angela Baca. She was producing blackware herself by the time she was eleven. When she decided to become a career potter, she spent time in museums studying the artform. She made pots that honored the traditional forms with a beautifully polished modern finish. The only decoration she used was the traditional Santa Clara bear paw, and she did so infrequently. She received many notable awards during her career and placed her works in major museums.