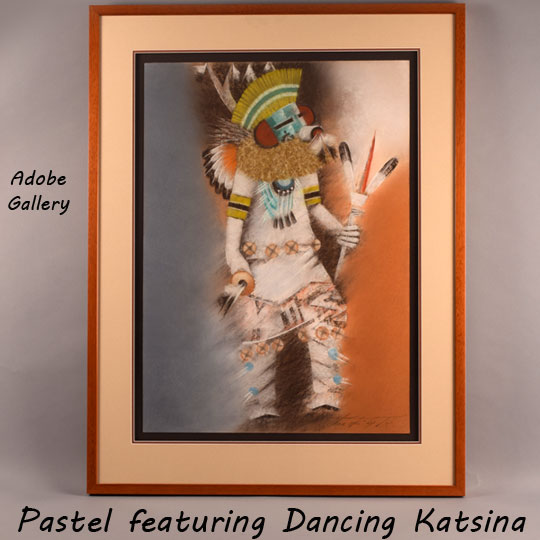 Ohkay Owingeh Pueblo artist Tommy Edward Montoya created this depiction of a kasiina.  It is a large and impressive piece, completed in oil pastels.  Here, working with his preferred medium and portraying one of his favorite subjects, Montoya excelled.  He followed in the footsteps of earlier Pueblo artists by portraying a ceremonial subject in an accurately detailed manner, but he did so using his own unique style.  We have a great appreciation for these personalized expressions of traditional themes and imagery.

Montoya’s katsina stands in the center of the image, dancing toward the viewer.  He turns his head slightly to the left, giving the viewer an excellent look at his mask and headdress.  It is in this region that Montoya sticks mostly close to reality.  Behind and below, for the katsina’s body and the multicolored background, Montoya shifted his approach slightly.  Here, everything becomes a bit blurrier and dreamier, with colors crossing over and blending into one another.  This is a wonderful example of Tommy Edward Montoya’s unique, beautiful style.

The painting is signed Than Ts'áy Tas in lower right.  The board is mounted on a black backing, and surrounded by a gray mat with a maroon interior band.  The frame is a simple wood design.

Tommy Edward Montoya (1952-2009) Than Ts'áy Tas was born at San Juan Pueblo (now Ohkay Owingeh Pueblo) in the family home on the edge of the plaza.  His father passed away when he was very young, so his mother, originally from Nambe Pueblo, raised him herself.  Montoya attended the Santa Fe Indian School and the Institute of American Indian Arts in Santa Fe.  He continued on to get his BFA from California College of Arts and Crafts and MFA from University of California at Berkeley.  After returning to the pueblo from California, Montoya took a job as technical illustrator and photographer at Los Alamos National Labs.  He pursued his art in the evenings.  Once his reputation was established and his commissions increased, he quit his job at Los Alamos and pursued his art career full time.  Montoya developed two independent sides of his art: figurative studies of traditional Tewa ritual, and his more cerebral, abstract studies of color and form. His popular figurative works brim with vitality and action. His strong asymmetric compositions come to life as if one were witnessing a ceremonial function at the pueblo rather than viewing a piece of art.  Adobe Gallery had a long relationship with Montoya. We featured him as one of our primary artists at the Albuquerque gallery for a number of years. He was a wonderful person and an outstanding artist.

Recommended Reading:  100 Artists of the Southwest by Douglas Bullis