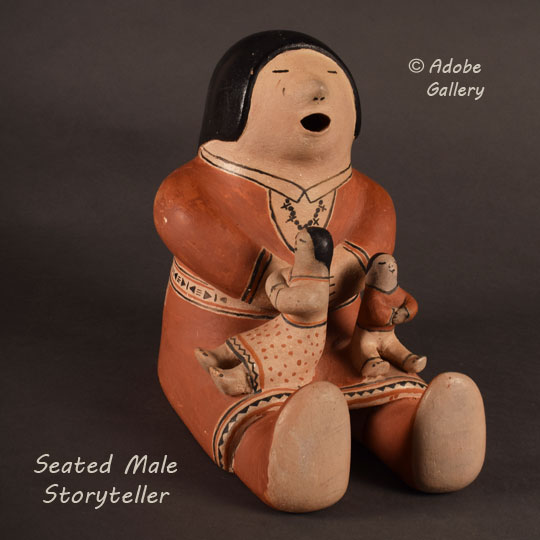 San Felipe Pueblo artist Del Transcosa created this Cochiti Pueblo male storyteller pottery figurine. The face of the storyteller with the rounded nose, linear eyes and open mount signify that Helen Cordero was a strong influence on the potter when making this figurine. Additionally, the placement of the arms, the shirt collar, necklace, belt, and decorated hem on clothing all are styles from Helen Cordero. There were no members of Del's family who were potters, so anything he learned was from Helen Cordero.

The size of the girl sitting on the adult's right leg is an indication that she is older than the smaller boy on the other leg. The figurine is signed Del Transcosa Cochiti N.M. on the underside in a box arrangement like that used by Helen Cordero.

In Barbara Babcock's book, referenced below, page 31, there is a photograph of one of Del's storytellers, made in 1980, that is indicated as "among his first." It is not known how many storyteller figurines Transcosa made, but this is the first one Adobe Gallery has seen in person, and we have been featuring such figurines since the late 1970s.

This figurine is one any collector of the Cordero family should have as there cannot be many in existence. It is quite likely that it was made in the 1980s. Helen Cordero died in 1994 and it is stated that none of her family continued in pottery after that.

Provenance: this Seated Male Storyteller from Cochiti Pueblo is from the collection of a Santa Fe family