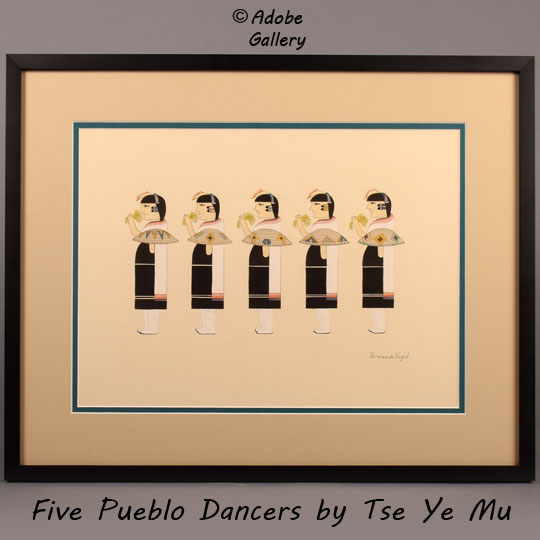 This Pochoir print was created from an original painting by Romando Vigil, or "Tse Ye Mu," of San Ildefonso Pueblo. As one of the early pueblo painters, Vigil practiced the traditional "flat style." Like the most talented of his contemporaries, he was able to develop his own unique variation of the traditional style, and his works are generally regarded as strong and collectible. With this image, Vigil presented a procession of pueblo women. They are depicted in line, performing a Basket Dance. They wear traditional clothing and hold plants and baskets. Each figure is beautiful, with fine linework and soft, appealing colors. The details—baskets and headdresses, most notably—were composed with skill and style, and the larger impression of the piece is quite strong.

Between 1929 and 1952, C. Szwedzicki, a publisher in Nice, France, produced six portfolios of North American Indian art, which included the print listed here. American scholars Oscar Brousse Jacobson, Hartley Burr Alexander and Kenneth Milton Chapman edited the publications. Many of the images were produced as Pochoir prints, which are similar in appearance to silkscreen prints. These works represent original art by 20th Century American Indian artists. In 1979, Bell Editions, Inc. of Santa Fe, New Mexico, published a facsimile edition of the 1932 French edition. We do not know which edition this particular print comes from.

The print has a signataure image of Romando Vigil in lower right. It is framed beautifully using archival materials and a black frame.

Romando Vigil (1902-1978) Tse Ye Mu - Falling Cloud was one of the San Ildefonso self-taught artists in the early part of the 20th century, which places him among the group that is recognized as the earliest known pueblo painters. He was the father of Albert Vigil and cousin of Tonita Peña. Vigil's works have been published in many major texts related to Native painting. He exhibited widely during his career, and his works have been placed in many prominent public and private collections. Romando Vigil was married to Maria Martinez's sister, Juanita. Their daughter was Carmelita Dunlap. For a number of years, Vigil was employed by Walt Disney Studios as a painter and illustrator.

Provenance: this Tse Ye Mu Image of Five Pueblo Basket Dancers is from a private collection