Untitled Painting of Taos Pueblo in Wintertime [ON HOLD - HT] 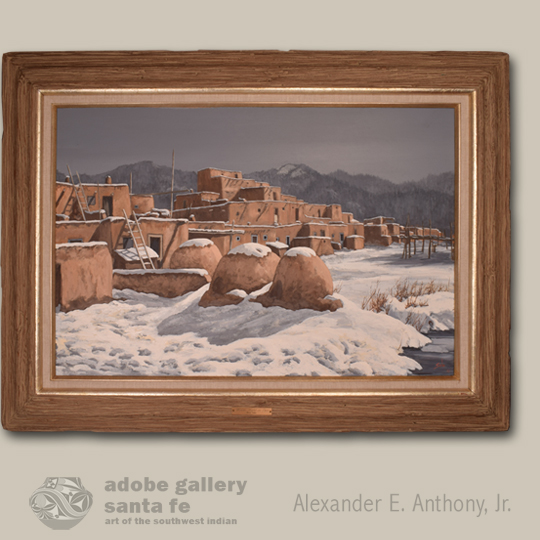 Betty Sabo (1928 - 2016) was a famous and successful artist who was born in Kansas City, Missouri.  Sabo rose to prominence as an artist while living and working in New Mexico. She majored in art at the University of New Mexico, and studied for five years under German-born painter Carl Von Hassler.  She is best known for her realistic oil paintings of New Mexico and Colorado landscapes, but she also found success and acclaim as a sculptor. Her works received many awards and are included in prominent public and private collections around the country.  Today, she is highly regarded by New Mexico collectors. In 2012, then New Mexico governor Susana Martinez declared February 10th to be Betty Sabo Day, in honor of the artist’s considerable list of accomplishments. Sabo passed away in 2016.

Taos Village and Taos Pueblo have served as a subject for great works by many accomplished artists and inspired the early creative processes of aspiring painters.  It’s a quiet, small town, with an endearingly eccentric population and a rich history of creation and collection. Many of its residents are artists or otherwise creatively-driven individuals.  The areas surrounding the town itself are gorgeous—peaceful, sparsely populated, and visually dramatic. The mountains against which the town is nestled are truly grand. They’re steep and colorful, standing in stark contrast to the sleepy adobe town and sprawling stretches of desert below.  Taos is a uniquely beautiful place, and its status as a favorite subject of many of the Southwest’s greatest artists is deserved.

This large oil painting is one of the most impressive Betty Sabo paintings that we’ve ever handled.  Her subject here is Taos Pueblo in wintertime. The Pueblo, with its tall stacks of adobe walls linked to one another by rooftop walkways and ladders, extends towards the viewer from the east, becoming larger and more detailed as it grows closer.  Behind the Pueblo, the mountains inject color, form and beauty into an otherwise dreary gray sky. Sabo’s limited color palette—white, brown, and gray, mostly—resulted in an incredibly realistic-looking scene. The Her ability to do so much with so little is admirable.  Less truly is more, at least in the hands of such a skilled artist.

Sabo’s dramatic presentation of this frequently-painted area is truly spectacular.  The long shadows cast towards the viewer by the three hornos in the foreground suggest that the sun has just risen over the mountains to the east.  The snow appears to be recent, too, lining the buildings’ roofs and dotting the tops of the hornos. Sabo’s masterful uses of light, color and shadow result in an image that somehow manages to accurately convey the crisp, dry feeling of a winter morning in Northern New Mexico. Anyone who has spent a winter in this region knows that the quiet beauty of a scene like this is always ephemeral—the snow won’t last long once the sun reaches its peak.  That these moments are so short-lived makes this image even more special.

The painting is signed “Sabo” in its lower right corner.  This signature allows us to identify the piece as a later work.

Condition: this Untitled Painting of Taos Pueblo in Wintertime is in excellent condition 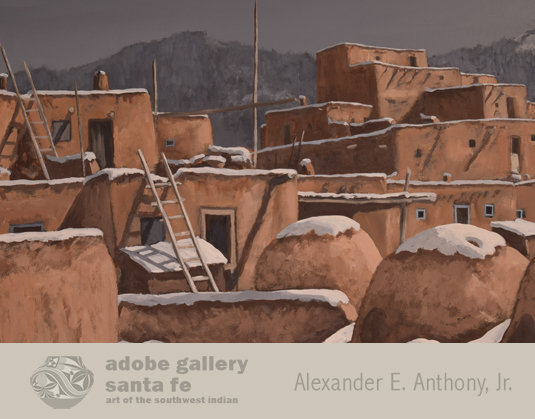