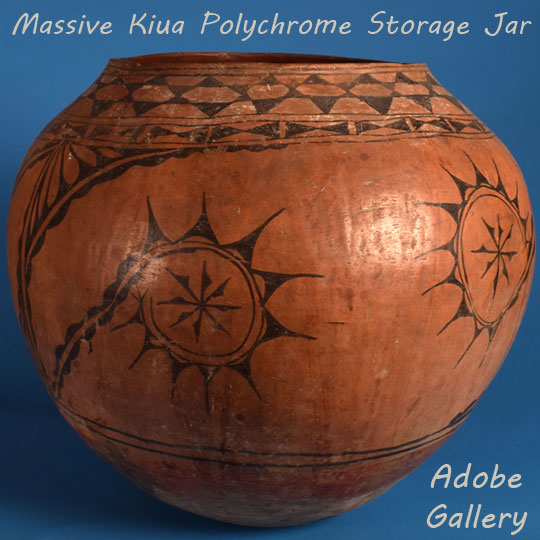 The historic period of pueblo pottery has been defined as beginning with the first contact with Europeans in 1540, the reasoning being that it was the Europeans who began documenting events, creating a history of the area, which was a logical beginning of the historic pottery period.  At that time, pueblo potters made pottery for their own use and as a trade item to members of other pueblos or tribes.  It should be stated, however, that the natives recorded history verbally and with markings on rocks and canyon  walls.

With the arrival of the Spanish, the market for pueblo pottery greatly increased as it was easier and smarter to procure pottery from local pueblo potters than to wait for imports to arrive on the Camino Real from Mexico City, a journey that took over 6 months to complete.  New shapes and new sizes of pottery were developed to satisfy the needs of the new markets.  Large storage jars were standard measurements of volume to facilitate trade of wheat or grains to the market.  In some cases, the historic jar in which the grain was stored was given with the sale of the grain as it was considered only a container of the product being sold.  One wonders if the purchaser of a jar full of grain used the product then discarded the container.

Kiua pottery is produced at Cochiti and Santo Domingo, two Keres pueblos.  This very large storage jar, which dates to the mid 1800s and was made at Cochiti, is one of the finest examples of this type of pottery that Adobe Gallery has ever handled. It is very globular in shape and has a rounded bottom, which is typical of mid-century storage jars.  The designs are typical of those from the period—simple, uncluttered and elegant.  The rag-wiped red band on the underbody was used commonly from the beginning of the historic era to the late nineteenth century.

The jar's designs are absolutely gorgeous.  The primary design elements are pairs of curving lines that reach up and down towards the jar's widest point.  They begin with shallow curves, and then grow shaper, eventually spiraling into themselves.  Triangular and ovular designs repeat along the exteriors of these partial spirals.  Within the framing lines' corners, curving along with these graceful spirals, are sloping triangular shapes.  Within these sloping triangles, reaching out from the corner, are teardrop-shaped desings.  Francis Harlow's Matte-Paint Pottery calls these designs "radiating negative leaves."

A storage jar of this age and size is extremely rare.  The ones that do exist are mostly safely stored in museum collections.

Condition: the bottom of the jar has been broken into several pieces and reassembled.  The breakage was limited to only a small section of the underbody of the jar, visible in the photograph below.