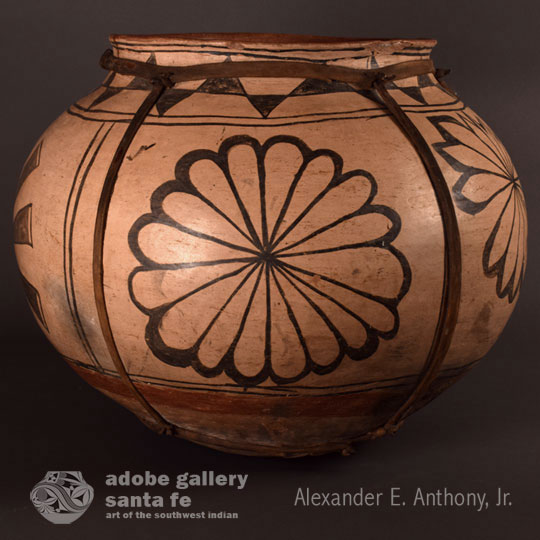 Among pueblo ceramics, large storage jars like this exceptional Cochiti piece were probably the least frequently made. A single storage jar, or perhaps two, was enough for the average family home.  Such jars were generally located in a secure spot in or near the kitchen and used for storage of any dry materials. Loaves of oven bread might be stored in preparations for a feast day, protected by turning a bowl over the jar opening or simply draping a cloth over the opening.  There are many additional ways that a storage jar might be put to use.

Large storage jars probably had their beginning during the seventeenth century in response to the introduction of wheat by the Spanish.  Decorations on such large vessels differed from that used on water jars, canteens and food bowls, as there was an excessive amount of space on which to place designs.  Rather than fill the area with a large amount of small design elements, it was more practical to use large bold designs for a stronger impact.

This storage jar has a flat bottom and a rounded shape. It is difficult to specify a date that this jar was made but it was most likely the last quarter of the nineteenth century. Based on similar published examples, it could date to as early as 1850.

The potter chose to display three very large rosette designs and two starburst designs on this jar. We have displayed this jar on an eighteenth century Spanish Colonial New Mexican wood chest attributed to a member of the Ortega family of Santa Fe and dating circa 1775-1795.

This jar represents the artistic talent of a Cochiti potter who remains unknown.  She formed a beautiful large jar with absolute precision and applied a bold design of her own creation. The jar was used early in its life and, apparently, following a crack at the rim, was needed for continued use. Leather strips around the neck, over the body and circling the lower part of the jar provided stability, allowing continued use.

This is an exceptionally rare, extraordinarily beautiful example of historic pueblo pottery.