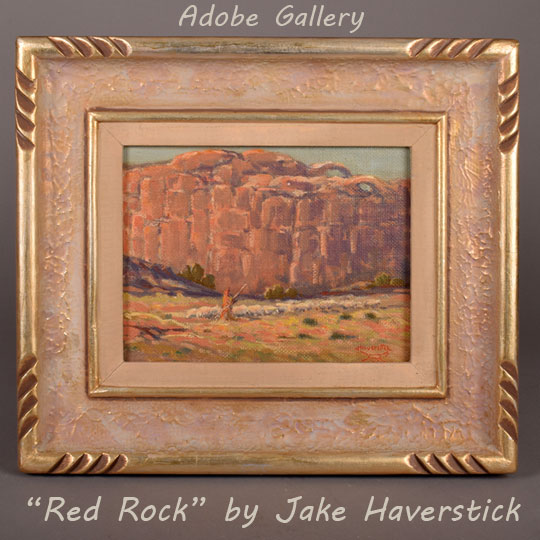 This original oil painting by Albuquerque artist Jake Haverstick is titled “Red Rock.”  It features a shepherd herding a flock of sheep.  They’re resting in a grassy field, in the shadow of a massive rock formation.  This steep formation rises from the field, covering about two thirds of the image.  Haverstick used a combination of pink, purple, and tan oil paints to create this wall of rock.  On the far-left side, it’s mostly pink and tan.  On the far- right side, purple has taken over, creating a strong shadow.  Throughout the lower section of the image—the field, the shepherd, and the sheep—Haverstick included diagonally aligned dashes of orange and yellow, adding warmth and lively energy to the scene.

The painting is signed J. Haverstick in lower right with his hallmark image. The following text is handwritten on verso: “Red Rock, N.M., 118.”  The canvas board is framed in a beautiful frame, which was made by Haverstick’s wife Fay.  The frame is carved, textured, carefully painted, and marked with the stamp of Fay’s framing operation.

Jake (Ralph E.) Haverstick (1898 - 1962) was a painter who lived and worked in New Mexico.  While living in Taos, Haverstick met and was mentored by W. Herbert Buck Dunton, a member of the Taos Society of Artists.  He and his wife Fay eventually moved to Albuquerque.  He lived there for the remainder of his life, painting Western images.  Fay made beautiful, handcrafted frames for the works of Jake and other notable Albuquerque painters.  Haverstick passed away in 1962.

Provenance: this Original Oil on Canvas Painting "Red Rock" by Jake Haverstick is from a private Santa Fe collection