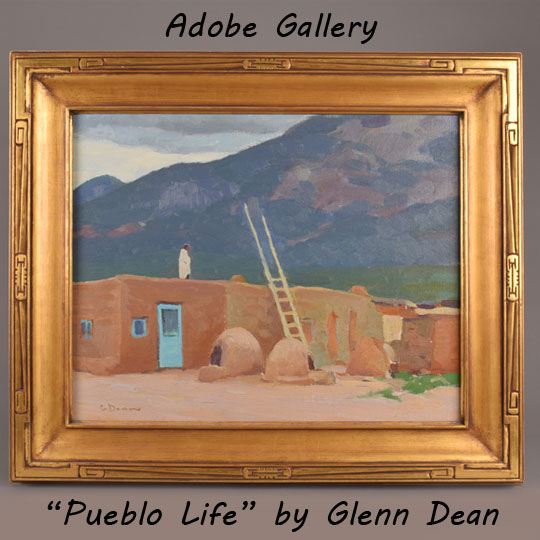 This original painting of Taos Pueblo was created by Glenn Dean in 2009.  Dean is an immensely skilled painter with a rare ability to capture the magic of the southwestern desert.  With “Pueblo Life,” Dean directs his eye to Taos Pueblo and the surrounding mountains.  In the foreground, we see a row of pueblo buildings and horno ovens.  A tall ladder rests against the edge of one of the buildings, and a man stands on the roof nearby.  In the background, the mountain range rises into a dark, dramatic sky.

Dean’s work with this Taos Pueblo scene is, in every way, excellent.  His soft color palette is both beautiful and accurate to the subject’s actual appearance.  Anyone who has visited this area will recognize this mountain range—its purple, blue, and green tones and its sudden, severe slopes appear here exactly as they do in reality.  Dean included just a few details, mostly in the building nearest the viewer.  As the row of adobe structures extends farther away, it all starts to blur together wonderfully.  A few carefully applied strokes of stronger tones appear here, defining the boundaries of these distant buildings.   Dean’s affinity for and familiarity with Taos Pueblo is evident in this painting. “Pueblo Life” is a dreamy, beautiful image from one of the most interesting contemporary creators of southwestern landscapes.

Glenn Dean (b.1976) is a painter who recognized his interest in art at the age of 13. However, he didn't realize his love for painting the landscape until his early 20s. His path became clear when he first saw examples of work by the California and Western landscape painters of the early 1900s. "Their work emphasized the importance of seeing the color of light combined with interesting compositions and seemingly effortless designs, while carefully observing the simple and basic characteristics of a specific location," Dean said.

Dean gained recognition in the art world at a relatively young age. He has appeared in several national magazines, including Western Art and Architecture, Southwest Art, Art of the West, and American Artist. Glenn has won a number of awards, including the first ever "Emerging Artist Award" presented by Art and Antiques magazine. He is also the recipient of the Grand Prize and Artists Choice awards at the inaugural Tucson/Sonoran Desert Museum Plein Air Invitational.  Dean paints on-location throughout the Southwest, dividing his time between deserts, mountains, and coastal subjects. He feels that time in the field and in the studio are equally important.  In his studio, Glenn develops larger compositions worked from field studies and other references. After living in New Mexico for nearly 4 years, Glenn returned to his native state of California, where he lives on the Central Coast.

Provenance: this Original Painting titled "Pueblo Life" by Glenn Dean is from the collection of a gentleman from Santa Fe