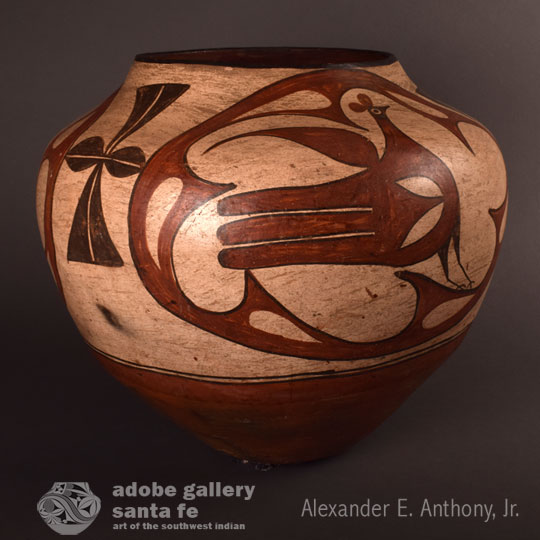 This large storage historic pottery jar from Zia Pueblo is one that could have been made for use at the village or for trade or sale to another village—pueblo, hispanic, or anglo.  Zia potters are known for having trade relations with outsiders, particularly with their neighbor, Jemez Pueblo. Crops grew easily in the moist hills of Jemez Pueblo and were a convenient and desirable trade item for Zia pottery.  There are more Zia dough bowls, storage jars, and water jars on the market today than the same from other pueblos, an indication that Zia potters were busily producing more than was needed in their homes.

This jar dates to 1890-1910 and is somewhat unique in design layout.  The use of a Zia bird is not unusual for the period, but the manner in which the bird is framed is unusual.  Before 1890, Zia birds appear to be uncaged, not surrounded by double rainbow arches or enclosed in framed boxes.  After 1920, it seems the preference was to enclosed the bird under single or double rainbow arches. On this jar, the bird is framed in an elaborate oval band.

There are three oval frames, each containing a single bird, encircling the jar.  Each oval frame is separated from its neighbor by a dark brown element which appears to be stylized clouds.  The birds were applied in a beautiful rich dark red slip as were the ovals surrounding them. The dark red contrasts beautifully with the dark brown clouds.  All of the red elements are outlined with thin black lines.

Below the design section, the lower body has a stone-polished finish, over which is a one-inch wiped-on red band, typical of Zia pottery prior to 1930.

The simplicity of the design, with large areas left without being cluttered with fill-in design elements, greatly increases the dramatic impact the jar imparts.  It is artistically sophisticated in a minimalist manner. It is a most beautifully rendered design by an artistic painter.

Condition: very good condition.  The jar tilts slightly and the tilt has been corrected by a previous owner by placing pads on one side underneath.

Provenance: from an extensive pottery collection from Colorado