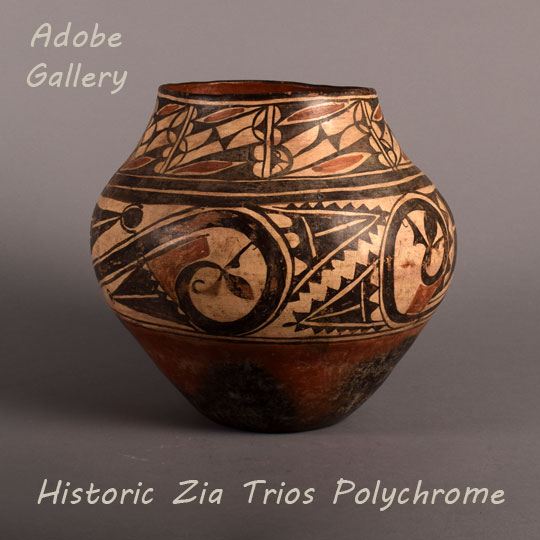 The overall appearance of the design is “bold” because of the extensive use of black pigment and its strong intensity.  The lack of the use of red in the design adds to the intensity of the black.The neck design is a series of rectangles containing three design elements in slanted positions.  They appear to represent clouds.  Dividing the neck design and that of the body is a pair of unusually wide framing lines, both of which have a ceremonial line break.  The lower third of the jar was finished in stone-polished red slip and has a beautiful array of fire clouds from the outdoor firing.

Although designations have been assigned to periods of production as shown above, it must be remembered that potters actively working at the time did not necessarily make changes simultaneously.  A potter making pottery in 1855, during what has been designated as the Trios Polychrome period, might have continued her style until her death in 1895. Technically, according to the authorities, she was in the Zia Polychrome period, although she, herself, was still making what she had learned to make in the Trios Polychrome designated period. The designation was not observed by potters, only by authorities studying pottery.

Provenance: this Zia Pueblo Historic Trios Polychrome Pottery Jar wasacquired by us originally from a client in Kansas City, and sold to a client in New York in 2004 from whose estate we now have it back.