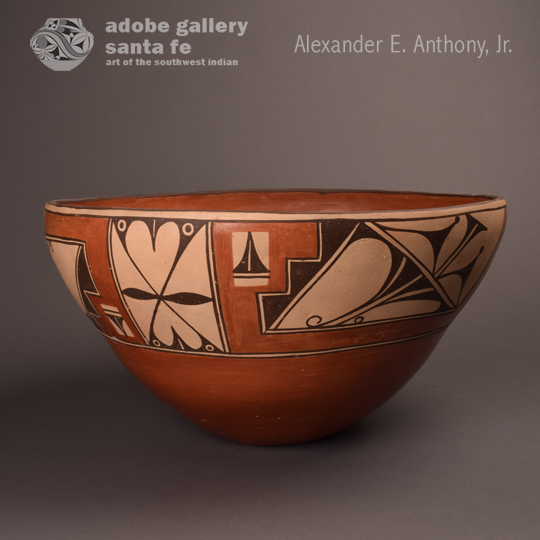 Jonathan Batkin once pointed out what should have been obvious had one taken the time to think about history.  There was no need for large dough bowls or for the outdoor ovens called horno prior to the arrival of the Spaniards.  The reason being that the Spaniards brought flour to the pueblos from which they made oven bread—thus the need for the bowl and for the oven.

Even though the Spaniards came in the late 1500s, it was close to the mid-1700s before the pueblo people accepted the white flour from the Spaniards.  Maybe it took 150 years for the pueblos to accept the change, but gradually they did.  Dough bowls seemed to appear at Zia Pueblo in the late 1700s.

The experience gained in making large storage jars for storage of dried foods and other necessities eventually paved the way for potters to experiment making dough bowls.  The design elements on dough bowls have persisted almost without change since the first ones were made.  This design was first developed on water jars during the San Pablo Polychrome period (1760-1820) and then used in dough bowls even into the present Zia Polychrome period.

The design is typically divided into two segments—one long and one short and square.  The long panel has a wide orange band that goes under and then over black design areas.  The two panels of this type are separated by the shorter ones that feature black designs over a cream color.  The interior is stone-polished red slip.

This dough bowl appears to be from the mid-twentieth century, possibly 1950s.  It has a stone-polished red interior that does not show any indication of prior use at the pueblo.  The design band is typical of most dough bowls from Zia.  The design varies only slightly, if at all, on all Zia dough bowls.

Provenance: from the collection of a family from New York 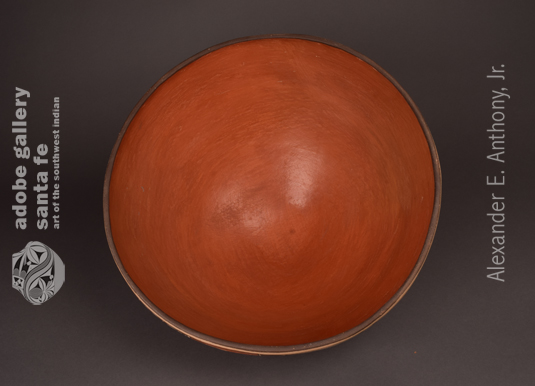