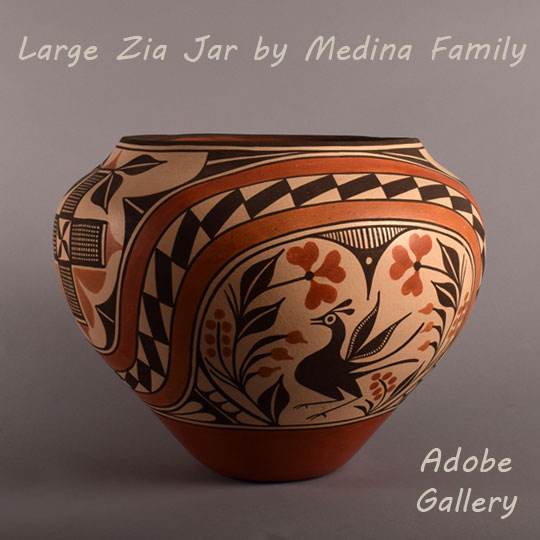 This large Zia Pueblo pottery jar was made in collaboration by a mother and her daughter. Sofia Pino Medina made the jar, and her daughter Lois Medina painted its designs. The result of this partnership is hugely impressive. Sofia's work with the foundational clay is impressive. The jar's shape is like that of a functional pueblo OLLA, or water jar, with one notable difference: the pottery jar is expanded in size, just slightly, beyond that which is typical of a utilitarian water jar. Its rim is wider, too, measuring about nine inches in diameter. A piece that was made for use, rather than display, would likely have a smaller opening. The jar's widest point sits at the center of a pleasant semicircle. Its rim curves upward gently.

Lois Medina’s design work matches the quality of her mother’s work forming the pot.  A three-color rainbow winds up and down around the jar, reaching two peaks and two valleys.  Above these valleys and below these peaks, two designs appear, two times each.  The first is a classic Zia Pueblo bird, dancing beneath a canopy of flowers and leaves.  The second is an elaborate cross design with leaves emerging from its ends and within its corners.  On a smaller jar, these complex designs might read as excessive or busy, but on this large piece they sit perfectly.  This is a fine example of contemporary Zia Pueblo pottery.

The jar is signed Sofia Medina and Lois Medina, Zia on its side, below the lower framing line.

Sofia Pino Medina (1932 - 2010) married into the Medina family in 1948.  She and her new husband Rafael Medina (1929-1998) lived with his grandmother, Trinidad Medina, who taught Sofia the techniques of potting. Her mentor, Trinidad, was one of the most talented potters at Zia Pueblo.  Sofia learned well and produced quality wares throughout her life.  Sofia used only natural materials in her pottery, including the pigments for painting.  Lois Medina (1959 - ) is daughter to Sofia and Rafael Medina.

Condition: excellent condition with one very small abrasion to the pigment

Provenance: this Large Zia Pueblo Polychrome Pottery Jar by Sofia and Lois Medina is from a private Santa Fe collection