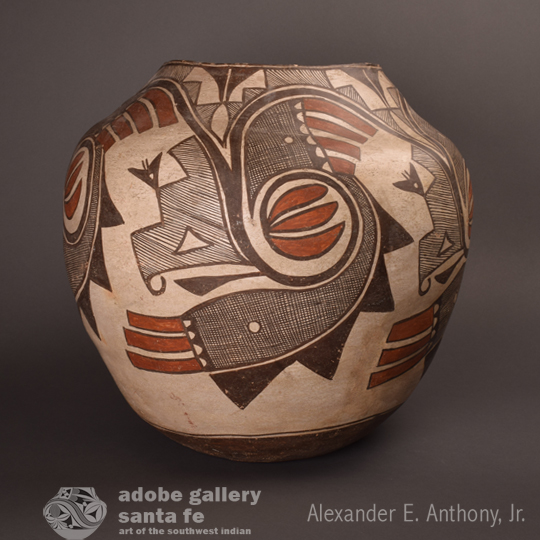 A jar, similar to this one, is illustrated in Harlow and Lanmon, page 509, and attributed to Lawsaiyateseta Lonkeena.

In Harlow and Lanmon, there is a photograph of the potter with a similar jar balanced on her head.  There is also a photograph of another similar jar in the same reference. Adobe Gallery featured a group of Zuni historic jars in 2001, one of which was quite similar to this jar.  We did not, at the time, know who the potter was. Further illustrations in Harlow and Lanmon are Figure 32.19 (page 438) and Figure 35.12 (page 533), both of similar shape and design.  It appears that this potter favored this design

All the jars are very similar in vessel shape and almost identical in Rainbird design.  It is stated that Lonkeena made the jar that is balanced on her head, and it is presumed she created this style and surely made the other ones in existence.   It is probable that this jar dates to circa 1910, a time when the potter would have been approaching 30 years of age.

To quote from Harlow and Lanmon (see reference below):

It is believed that this Rainbird design may be a family design and was perhaps originated by Mrs. Lonkeena.  The beak of the bird is the curved black outlined shape at the shoulder of the jar. It is filled with cross hachured black fine lines.  There are four red feathers sticking out from the head and three in the black curved line at the body. The body then curves downward and is filled with black hachured lines that end in three red tail feathers.  This design is repeated four times around the body.

Fortunately, Lanmon and Harlow conducted extensive research and published the results.  It is their work that allows us today to make attributions to potters long since gone.

Condition: examined under UV (blacklight), there is a visible crack around ¾ of the circumference of the lower half of the vessel.  Approximately four smaller cracks run vertically down from the crack around the circumference, all restored and stable. Overall condition of this Zuni Pueblo Polychrome Rainbird Design Storage Jar is very good.