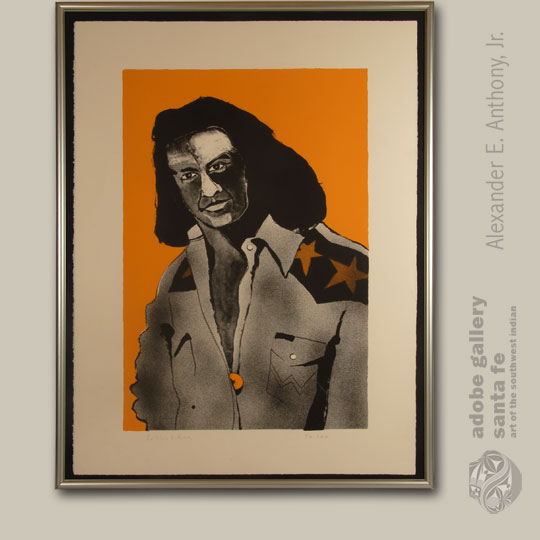 Fritz Scholder (1937-2005) was a painter, sculptor and printmaker whose works in a variety of media are displayed in museums and prominent collections around the world. Scholder was a naturally gifted artist whose unique mastery of color and form allowed him to work effectively with a variety of media.  Though perhaps best known for his paintings, Scholder’s efforts as a printmaker have aged very well and become some of his most recognizable images.

Scholder began exploring lithography in 1970 at Albuquerque’s Tamarind Institute, a nonprofit lithography workshop that is still in existence today.   He had experimented with the medium in college and was frustrated by the results, describing the process as “laborious and terribly technical.”  Under the guidance of Tamarind’s experienced master printers, Scholder thrived.  Even his early efforts were creative successes, and he found himself quite infatuated with the lithography process.

“Artist at 40 as a Buffalo” was completed in 1977, seven years after Scholder began working at Tamarind.  By this time, he’d mostly abandoned the complex expressionist linework seen in his early lithographs in favor of simpler, bolder compositions.  These later images rely on negative space and thick, uniform applications of colored ink to frame and define their subjects.  Here, the subject is Scholder himself, wearing an unbuttoned western shirt and looking directly at the viewer.  He was a handsome man whose face was at once intense and warm—an ideal subject for a portrait.  His strong facial features and long, thick hairstyle are represented here very accurately.  The image is strong in color, form, and composition, and its subject makes it a must-have for the serious Scholder collector.

According to the included print documentation, it took Scholder many attempts to find the appropriate colors.  11 color trial proofs were completed, in a wide variety of different colors.  The orange-yellow that he eventually selected and approved was an excellent choice.

“Artist at Forty as a Buffalo” was completed in September 1977 at Albuquerque’s Tamarind Institute.  This is number 96 of the 100 prints in the numbered edition.  It was hand printed by master printer Steve Britko.  It was signed and numbered by the artist, and marked with the chop marks of Tamarind, Scholder, and Britko.

Condition: this print "Artist at 40 as a Buffalo" is excellent condition

Provenance: from a collector in Albuquerque 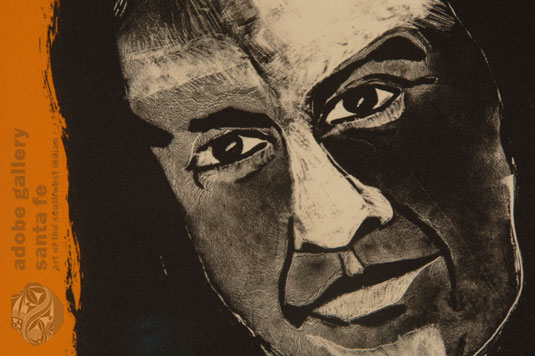