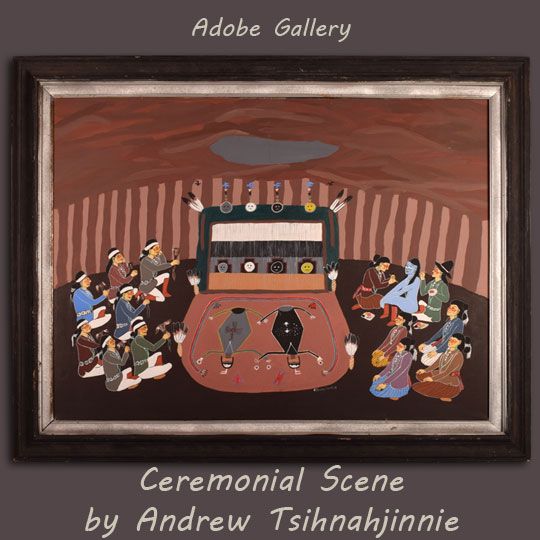 This massive acrylic painting by Andrew Tsihnahjinnie features 14 humans arranged around a sand painting and a ceremonial structure.  Each Diné person’s clothing and jewelry are accurate and detailed.  Their faces are composed similarly, but they feature enough subtle variation to suggest that Tsihnahjinnie paid careful attention while painting the large group.  His dramatic, beautiful color palette lends an element of intensity to the scene.

This Navajo ceremonial painting by Andrew Tsihnahjinnie is unlike anything we’ve seen before from this influential Diné artist.  It was completed using acrylic paints on canvas—materials that we don’t often associate with early native painters.  Our records indicate that Tsihnajinnie worked most frequently with watercolors.  He must have spent a fair amount of time working with acrylics, too, as his work with this image is excellent.

When preparing to list this painting, we reached out to a Diné friend with a deep knowledge of his peoples’ ceremonial functions.  He shared the following assessment of this scene: “The painting depicts the male shooting-way ceremony, the structure facing the sand painting represents the sun’s house. The sand painting represents Mother Earth and father sky. The patient of the ceremony is being painted on before sitting on the sand painting.”  Tsihnahjinnie’s depiction of the Shooting-Way ceremony is a true feast for the eyes.  With its striking colors, careful detail, and strong composition, this is one of the finest works we’ve seen from the influential Diné artist.

The painting is signed A. Tsihnahjinnie.  It is displayed in a wood frame with a fabric interior band.

Provenance: this Original Acrylic Painting of Diné Ceremonial Scene by Andrew Tsihnahjinnie is from a private Santa Fe collection