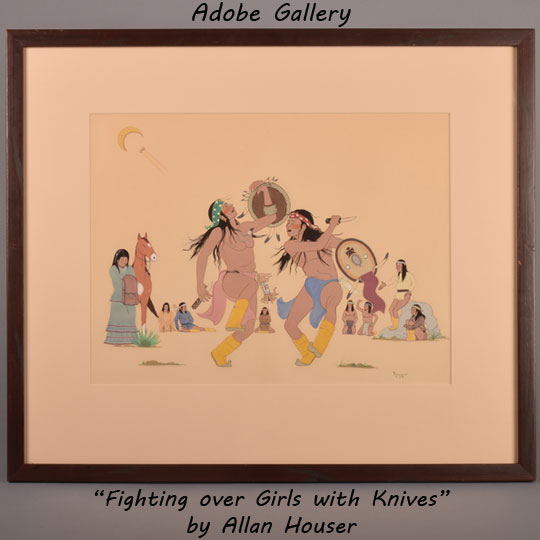 It is always a treat to come across an artwork by the great Apache artist Allan Houser. This painting, titled "Fighting over Girls with Knives," is particularly exciting. It is rare for a piece like this—one that's completed in Houser's version of the Santa Fe Indian School style—to show up on the market. Houser attended the Indian School from 1934-1938, and he found the "flat" style taught by Dorothy Dunn to be simplistic and restrictive. Eventually, he abandoned the style entirely, but not until he had managed to complete some of the very finest works of the era.

“Fighting over Girls with Knives” is dated 1938, which identifies it as having been completed at the tail end of Houser’s Indian School period.  One might infer as much without reading the date, as the image looks like Houser’s own highly evolved version of the flat style.  Houser’s primary subjects here are two Apache men.  The painting’s wonderful title tells us that they are fighting, but their fight appears to be every bit as graceful and beautiful as a ceremonial dance.  Perhaps this is not a violent fight, but some sort of display of affection for the female onlookers.  Whatever the case may be, Houser’s work is fantastic.

The muscular young men hold knives and shields, and wear nothing more than moccasins, headbands, and loin cloths.  The man on the right appears as though he is about to strike.  The man on the left, interestingly, holds his knife by its blade.  His pose is particularly dance-like, suggesting to the viewer that the men might be putting on a show for the gathering spectators.  Both men move with their eyes closed, as if fully absorbed in the proceedings.  Houser handled the action with incredible skill, outlining his men with impeccable thin lines.  Each of the nine spectators—eight humans and one particularly attentive horse—was crafted with the same sensitivity and care as the men in the foreground.  Certain spectators make expressive gestures with their hands; others appear to be bored.  A prominently featured young woman hangs her head, as if she has had enough of this testosterone-fueled display.  “Fighting over Girls with Knives” is a rare and wonderful painting from one of the most significant artists of the twentieth century.

The painting is signed “Houser” and dated “‘38” in lower right.  It is framed under a wide cream-colored mat in a simple wood frame.

Allan Houser (1914-1994) Haozous was a Chiricahua Apache painter, sculptor, teacher, and illustrator whose works are displayed in major museums and prominent private collections around the world. Today, he is recognized as one of the most successful and accomplished Indian artists of the 20th century. His works are included in the permanent collections of the Smithsonian Museum of American Art, the National Museum of the American Indian, and many other prestigious institutions. His many accomplishments include receiving a Guggenheim fellowship and being the first Native American to receive the National Medal of Arts. Through his sculptures, his paintings, and his efforts as an educator, Houser's voice remains one of the strongest in the world of Native American art.

Condition: excellent condition but has not been examined out of the frame

Provenance: this Original Apache Painting titled "Fighting over Girls with Knives" by Allan Houser is from a private Arizona collection