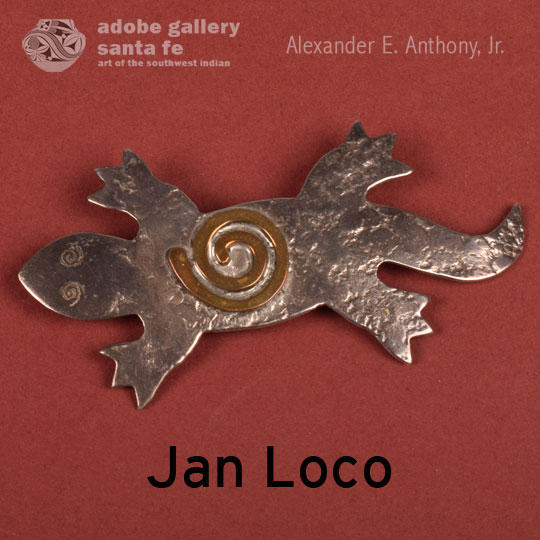 This Apache pin, which we have determined to be a salamander, is titled “Dreamer” and was fashioned in artist Jan Loco’s individualistic style.  It was hand cut with shears and textured by hammering with rocks having different surfaces. A bronze spiral was set on the amphibian's back. It is signed with the artist’s name as well as the name “Dreamer.”

Jan Loco began making jewelry in 1988. She developed a unique method of creating jewelry without the use of any power tools.  Using only heavy-duty shears, she cut and fashioned her piece to the desired shape, after which she hammered it with a specially selected rock until she achieved the desired texture.  This is a laborious task, but she felt it honored her ancestry to use items of nature rather than power tools.

Jan Loco became interested in Apache symbolism and legend when, as a young adult, she discovered her Apache ancestry. Her work is inspired by the stories of her ancestors, incorporating designs reflecting the heavens, Apache legends as well as plants and animals of the Apache homeland.  She did not learn of her Warm Springs Apache heritage from her adoptive parents until she was an adult. It was then that she learned she was the great granddaughter of Chief Loco, one of the last of the Apache chiefs, who had been imprisoned in Florida in 1886 by the U. S. government.

Jan Loco no longer is making jewelry.  She moved from New Mexico some years ago and her whereabouts are unknown.

According to Wikipedia, salamanders are a group of amphibians typically characterized by a lizard-like appearance, with slender bodies, blunt snouts, short limbs projecting at right angles to the body, and the presence of a tail in both larvae and adults.

Condition: this Apache Sterling Silver and Brass Salamander Pin by Jan Loco is in original condition

Provenance: from the collection of a resident of Florida

A NEW GENERATION OF INDIAN ARTISTS [SOLD]
by

Apache (SOLD)
by Will Levington Comfort