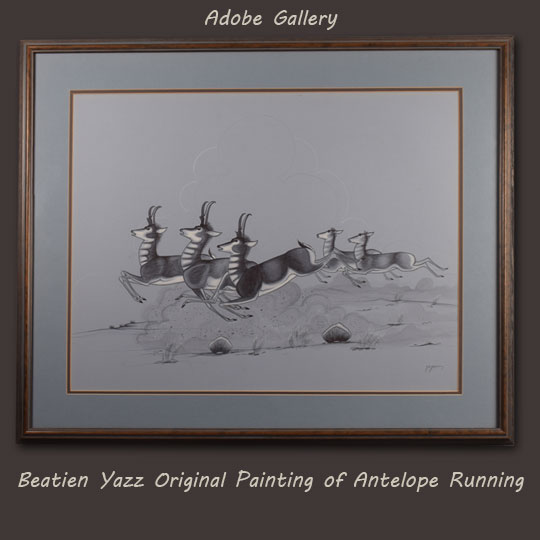 This large original painting was created by Diné artist Beatien Yazz.  It features five antelope running through the desert.  Three adults lead the way, and two calves trail behind.  They are all depicted mid-leap, moving in unison as they cross the peak of a small hill.  Clouds of dust rise from the ground below their hooves.  Up above, a faint cloud formation echoes the shape of the dust clouds.

Yazz’ work here is elegant and beautiful.  Each antelope was depicted with care and precision. Detailed shading gives their bodies depth.  Their expressive eyes are nearly identical in composition, but they still seem to give each antelope its own unique personality.  The painting’s unusual color palette is one of its great strengths.  The paper is a wonderful blue-gray, and Yazz wisely chose to use just a few tones atop it.  Black, white, and a wispy gray combine to form every detail in the image, giving the painting a unique and appealing atmosphere.

The painting is signed B. Yazz in the lower right.  It is framed in a carved wood frame under a blue mat with a gray interior band.

Beatien Yazz (1928- ) is a Diné painter who was born in 1928 on the Navajo Reservation.  Yazz is only one of his many names. There is his Navajo name, of course, which we do not know. He has signed his paintings with many variations: Beatien Yazz, Beatian Yazz, Beatian Yazzia, Beatin Yazz, and B. Yazz. Finally, there is the name that most people use, Jimmy Toddy.  Yazz exhibited widely and enjoyed a long and successful career.

Provenance: this Beatien Yazz Original Painting of Antelope Running is from the large collection of a Santa Fe resident, who purchased the piece directly from the artist.