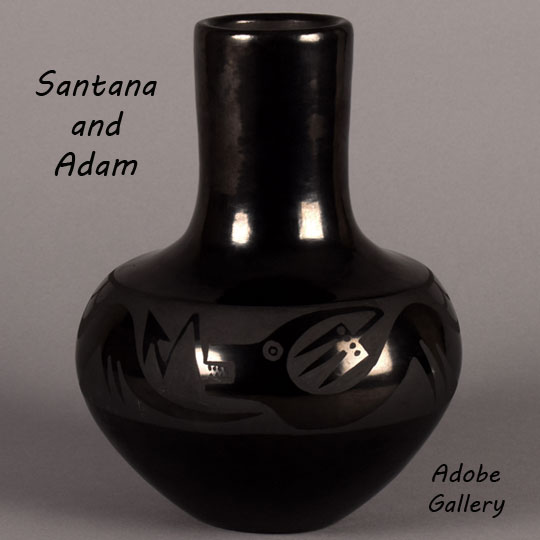 This black-on-black jar was created by San Ildefonso Pueblo potters Santana and Adam Martinez.  The vessel shape is unique and enormously attractive, beginning down below with a common round form before making some atypical turns up above.  These personalized expressions begin at the top edge of the design band, with the vessel taking a sharp turn inward.  Then, it makes a sharp, rounded curve up to a tall, thin neck.  It is unique and creative, but also classic and refined.

A single design band appears around the jar’s widest point, and it suits the vessel perfectly.  It features a bold, compelling Avanyu.  Trios of rain clouds appear in the areas in which the Avanyu’s body bends down.  A dot and a larger circle form its wide eye.  The remainder of the piece is unpainted, displaying a gorgeous glassy polish which, like the design, suits the vessel quite well.  This is a fine example of Adam and Santana’s work. The bottom of the jar is signed Santana / Adam with a horizontal line between their names.

Maria Martinez' oldest son Adam, and his wife Santana were recognized potters even though they are mostly associated with having helped Maria Martinez with her pottery. They worked together making black-on-black pottery for most of their long lives. Collaborative pieces with their dual signatures have been seen for over 50 years. Santana Roybal Martinez (1909-2002) painted designs on pottery and Adam assisted in firing pottery for Maria. Santana came from a long line of talented painters and potters. Her grandmother, Dominguita Pino Martinez, was a famous potter and her brother, Awa Tsireh, was a famous painter.  Adam Martinez (1903-2000) was the oldest son of Maria and Julian Martinez, and he was a serious asset in assisting his mother.  Adam helped with gathering clay and firing pottery during the last four decades of Maria’s life, following the death of Julian in 1943.

Provenance: this Black-on-Black Avanyu Pottery Jar by Santana and Adam Martinez is from a private California collection