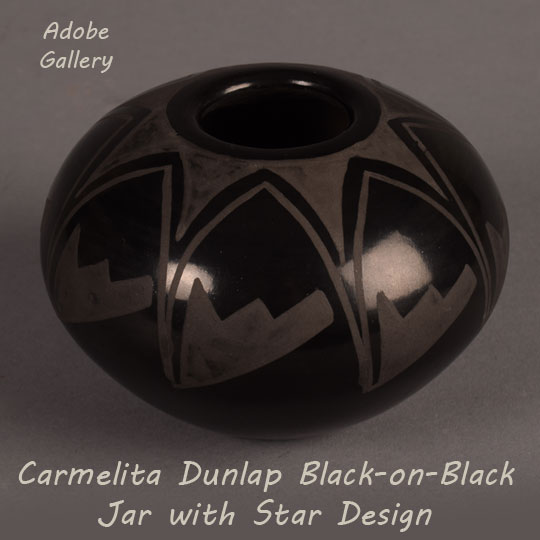 This black-on-black jar was made by Carmelita Dunlap of San Ildefonso Pueblo. Its short, round shape works well with the smaller scale of the piece, which is not surprising given the similarly well-balanced qualities of Dunlap’s larger works.

When studying the piece from above and staring straight into its opening, the viewer will see an eight-sided star design. One might interpret it as a sun, and the additional line running along its exterior seems to suggest this as well. From each of the exterior line’s pointed ends, an additional design emerges, floating within the space between the larger triangular forms. These designs end just below the jar’s widest point, allowing its beautifully polished black slip ample space in which to shine.

The bottom of the jar is signed Carmelita Dunlap and dated '77.

Carmelita Dunlap (1925-1999) was the daughter of Juanita and Romando Vigil of San Ildefonso Pueblo.  Her mother passed away when Carmelita was very young and her mother’s two sisters, Maria Martinez and Desideria Montoya, raised her.  She took turns staying with Maria for a few months and then with Desideria for a few months.  She learned to make Southwest Indian pottery by watching Maria and Desideria at work. Carmelita lived in California in the early 1950s while her dad worked for Walt Disney Studios.  In 1955, she moved back to San Ildefonso and began seriously focusing on pottery.  In 1974, she was one of the pueblo potters invited by President and Mrs. Nixon to visit the White House. One of her large pots was displayed at that time at the Smithsonian Institution.

Provenance: this Carmelita Dunlap Black-on-Black Jar with Star Design is from the collection of a client from the Midwest ONE SPACE - THREE VISIONS [SOLD]
by