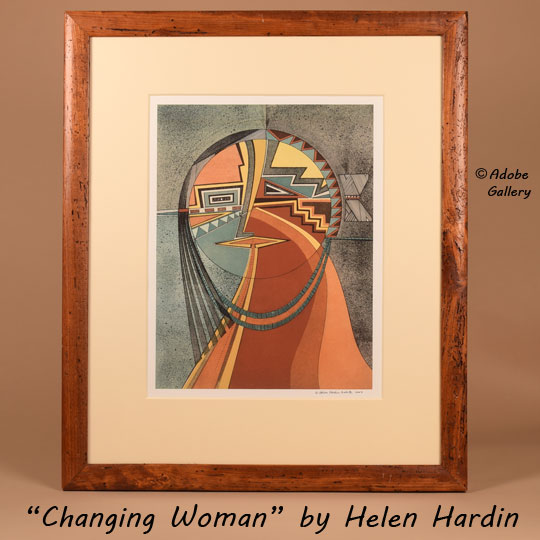 Among the strongest and most sought-after work by Santa Clara Pueblo artist Helen Hardin is a series of three exceptional aquatint etchings. "Changing Woman," "Medicine Woman," and "Listening Woman" comprise what is commonly referred to as Hardin's WOMAN SERIES. Hardin, the daughter of influential Santa Clara Pueblo artist Pablita Velarde, was primarily known as a painter. In 1979, art dealer Sue Di Maio began encouraging Hardin to explore printmaking. Hardin's contemporaries-Fritz Scholder and R.C. Gorman, most notably-had been creating lithographs successfully for years, but she believed these artists' prints to be inferior to their paintings. She was not excited about the possibility of exploring printmaking.

Hardin begrudgingly attended a meeting with Ricardo Ximenez, master printer and operator of El Cerro Graphics in Los Lunas, New Mexico. After a lengthy meeting regarding technical details and the receipt of a persuasive follow-up letter, Hardin agreed to go to work with Ximenes. She found herself to be well-suited to the medium and, after her earliest efforts were successes, began to enjoy it. She created and released 23 etchings in total, all during the last four years of her life.

This is a pigment print reproduction of "Changing Woman." It was created in 2002 by those who handle Hardin's estate. It is signed Helen Hardin Estate and dated "2002." It is a bit smaller than the original etching; otherwise, it's a faithful and accurate reproduction. It is framed nicely, under a cream-colored mat in a wood frame.

Provenance: this "Changing Woman" Pigment Print by Helen Hardin is a private collection