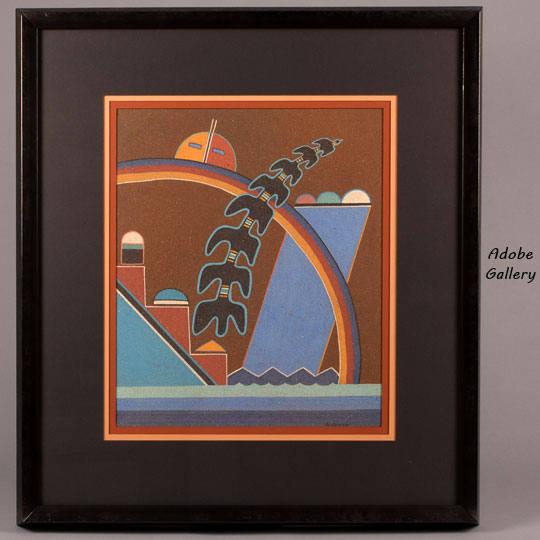 This wonderful painting was made by Joe Herrera of Cochiti Pueblo.  Early in his career, he created mostly traditional “flat style” images.  Later, he would move in his own direction, using a combination of symbolic elements and abstract forms to create colorful compositions.  Herrera was one of those gifted and creative artists who managed to create his own style while incorporating traditional themes and imagery. This piece uses a variety of symbolic elements to form a unique and appealing landscape.

At the bottom of the image, three horizontal lines in cool blue and green tones signify the earth.  A large kiva step pattern moves down from the left border, with different shapes emerging from each step.  In the distance, a jagged white line with a blue interior forms a mountain range.  A block of bright blue stretches from a colorful cloud pattern down to the mountain range, forming a stylish depiction of a distant storm.  A rainbow bends across the image, making its way up to a yellow and red sun.  Herrera combined these elements in a graceful, natural manner, creating an immensely appealing composition that is rich in color and abundant in energy.

The painting is signed Joe Herrera in lower right.  It has just been reframed, under a wide black mat with maroon and yellow interior bands.

Joe Hilario Herrera (1923-2001) See Ru was an innovative and successful Native American painter.  His father was from Cochiti Pueblo, and his mother—pioneering painter Tonita Vigil Peña (1893-1949) Quah Ah—from San Ildefonso.  Though his artistic inheritance and early art education came from his mother, Herrera is rightly considered to be from Cochiti Pueblo. He attended the Santa Fe Indian School, served in the US Army during World War II, worked at the Laboratory of Anthropology, and eventually completed a degree in art education at the University of New Mexico.  Dorothy Dunn’s American Indian Painting of the Southwest and Plains Areas states that he “did justice to a fine tradition in his authentically drawn ceremonial subjects.  His work was unlike that of his renowned mother, Quah Ah, for his was coolly decorative where hers was warmly natural.”  Herrera passed away in 2001.

Provenance: this Colorful Symbolic Cochiti Pueblo Painting by Joe Herrera is from the collection of a resident of Tennessee