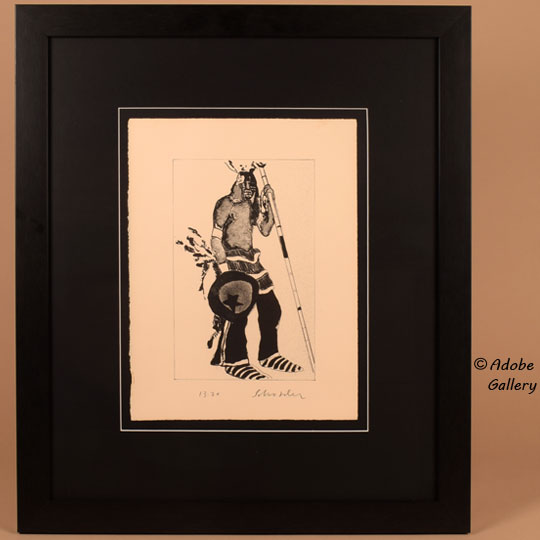 In his book Fritz Scholder Lithographs, Clinton Adams writes, "Scholder's attitude toward his Indian subjects is neither bitter nor witty. It is one of simple respect. Impassively standing or sitting, looking directly forward, his Indians confront the present and the future. At times questioning or sad, at times partially in shadow, the faces cause us to reflect upon them, to encounter their meaning, both as visual images and as symbols of our time. If a romanticism is present, it is the formal and expressive romanticism of art history, not the popular romanticism of the American West."

Adams' words ring true in the presence of "Indian with Shield." This image features a Native man wearing traditional clothing and holding a shield and staff. Facial features are visible here, which is a treat. His expression is intense; as Adams said, it invites reflection and encourages deep thought from the viewer. It feels like a faithful, respectful depiction that the subject himself would appreciate. Regardless of how one chooses to interpret it, this image is beautiful and powerful.

The lithograph is signed and marked with the chop marks of Tamarind, Scholder, and Ben Q. Adams. It is numbered 13/20. It is mounted with its edges exposed over a black background, within a black frame and a black mat with a white interior band. This print appears on page 97 of Clinton Adams' Fritz Scholder Lithographs.

Fritz Scholder (1937-2005) was an influential painter who was by birth one-quarter Luiseño Indian, a California Mission Tribe. He was born in Minnesota, spent two decades in the Dakotas, and lived in Galisteo, NM and Scottsdale, AZ. Scholder came to Santa Fe in 1964 to teach advanced painting and art history at the new Institute of American Indian Arts, a school established by the United States Department of the Interior. Scholder had obtained a Master of Fine Arts degree at the University of Arizona in 1964 before moving to Santa Fe and joining IAIA. Scholder enjoyed a long and successful career and is regarded today as one of the most innovative and influential Native artists.

Provenance: this Fritz Scholder Lithograph "Indian with Shield" (Second State) is from a private collection