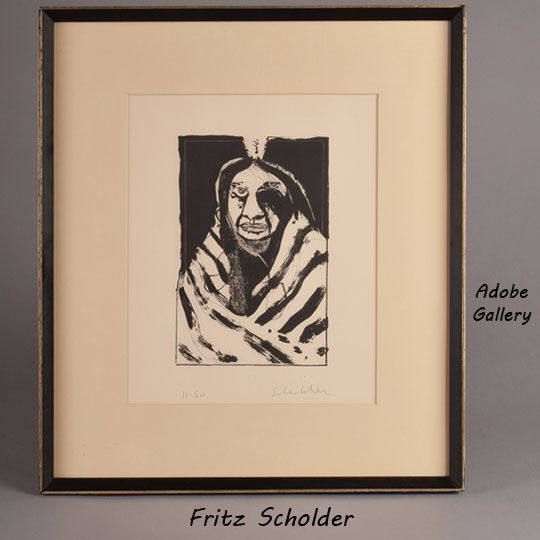 “Indian with Blanket No. 1” is a lithograph created by Luiseño painter, sculptor, and printmaker Fritz Scholder. Scholder vowed early in his career never to “paint the Indian.” Traditional flat-style paintings made by Native artists were, in his opinion, crowd-pleasing efforts that lacked originality.  Anglo-American artists’ paintings of Natives bored him too, with their romanticized portrayals of idealized Indians.  As an abstract painter with postmodern sensibilities, Scholder had no place in the world of traditional Native painting. After moving to Santa Fe to teach painting at the newly-established Institute of American Indian Arts, Scholder found himself immersed in Native culture and engaging with young Native artists for the first time.  He attended pueblo dances and began adding pieces of Indian art to his collection.  He was inspired by the forward-thinking young Native artists he instructed at IAIA.  Ultimately, he rescinded his vow and decided to “paint the Indian” in a way the Indian had not been painted before.

Scholder’s paintings and lithographs from this productive period are, nearly fifty years later, as fresh and exciting as when they were created.  The controversy stirred up by his more jarring images—Indians drinking alcohol, a pueblo dancer eating an ice cream cone while dressed in ceremonial regalia—came and went quickly, as the works are honest, kind, and open-minded in spirit.  Scholder wasn’t condemning the Indian for adapting to life in the twentieth century.  He was telling stories, telling jokes, and sharing anachronistic images.  In 1970, three years after he painted his first Indian, Scholder signed a contract to create a series of lithographs at Albuquerque’s Tamarind Institute.  He had experimented with lithography in the past with mixed results, and described the process as “laborious and terribly technical.”  Under the guidance of Tamarind’s experienced printers, however, Scholder began to enjoy the lithography process.  His compositional talents were well-suited to the unique medium of lithography, and his early experiments at Tamarind have become some of his most iconic images.

“Indian with Blanket No. 1” is one of those early experiments.  It was completed in November 1971 in an edition of 50.  It is a relatively straightforward portrait of a Native man dressed in traditional regalia.  His exaggerated facial features are a highlight.  One giant eye stares directly toward the viewer, while the other is bathed in shadow.  Curving black diagonal lines form a blanket around the man’s shoulders, and thin black and white lines frame the image.  This relatively small image has an incredibly strong presence.  It is one of the strongest of Scholder’s smaller-format lithographs.
The print is signed “Scholder” in lower right and numbered “11/50” in lower left.  It is marked with the chop marks of Tamarind, Scholder, and printer Wayne Kimball.  It is framed under a wide mat in a black and silver frame. “Indian with Blanket No. 1” is featured on page 74 of Clinton Adams’ Fritz Scholder Lithographs.

Provenance: this Fritz Scholder Lithograph "Indian with Blanket No. 1" is from the large collection of a Santa Fe family