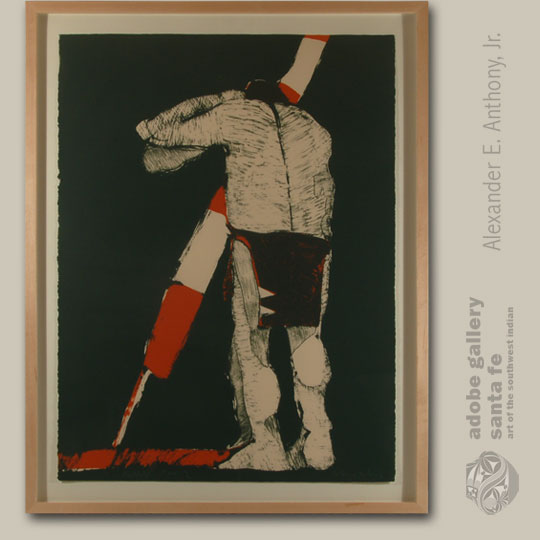 Luiseño Tribe artist Fritz Scholder enjoyed a long and fruitful working relationship with Albuquerque’s Tamarind Institute, a nonprofit lithography workshop that moved to Albuquerque from California in 1969.  As an abstract painter, Scholder initially struggled with lithography.  The planning and foresight required to successfully create multicolored images proved to be challenging to an artist whose work was often created very spontaneously.  Despite his initial struggles, he very quickly came into his own as a printmaker and discovered that the medium served his unique compositional voice very effectively.  His “Indians Forever” suite of lithographs, which was completed in 1971, looks like the work of an experienced printmaker but is actually the work of a naturally gifted artist exploring a new medium.

Fritz Scholder (1937-2005) would go on to create hundreds of lithographs at Tamarind, mostly during the decade that followed the release of “Indians Forever.”  These images range from representational to abstract, from traditional to experimental.  His mid-to-late 1970s works, which are more confident and expressive than his early 1970s works, have aged particularly well.  His multicolored lithographs from this period are expertly crafted bursts of color.  His black and white lithographs from this period are stark, haunting, and brilliantly composed.

This piece—The Odyssey #2 (Second State)—was completed at Tamarind in 1976 in an edition of 50.  It is signed by the artist, framed, and mounted with its edges exposed. The collaborating printer was Joy Baker. This is an artist’s proof—an impression taken during the printmaking process to assess the current state of the image.  It is not part of the numbered edition. 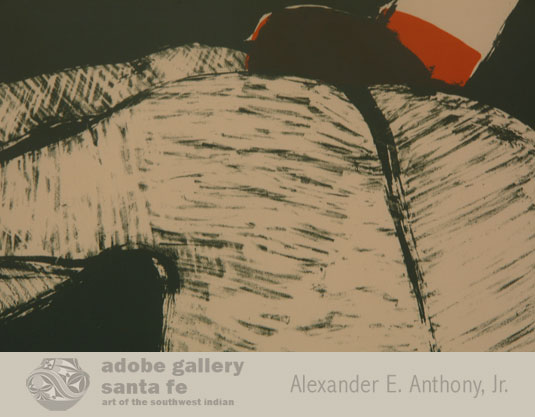