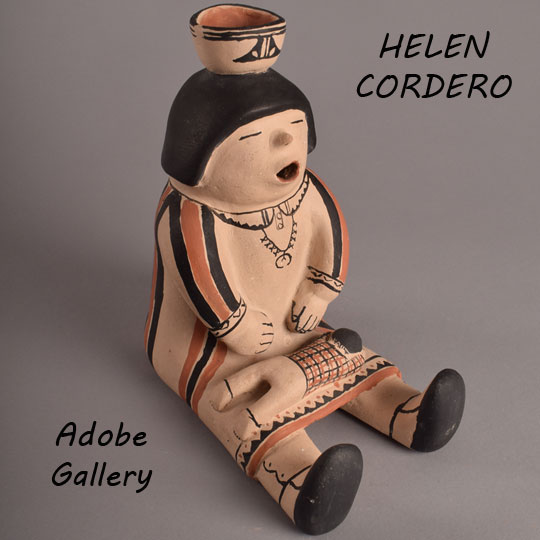 The temptation may be to call this a storyteller figurine because she has a sleepy child on her lap, but artist Helen Cordero of Cochiti Pueblo emphatically stated that she only made male storytellers because they were modelled after her grandfather.  This figurine would be labeled a female, perhaps a pot carrier.

She is dressed in a striped dress with a button collar and wears a squash blossom necklace.  She is wearing the traditional white moccasins with leather leg wraps.  On her head is a bowl and across her lap is a small boy. She is a fatter version than those made in the 1970s, and was probably made in the 1980s.

The figurine was purchased by the current Denver, Colorado, owners from Touch of Santa Fe in Littleton, Colorado, in 1997.  They were told at that time that it came from the collection of Helen Wampler of Casper, Wyoming, who had purchased it around 1986 at an auction at the Wheelwright Museum in Santa Fe.  It is in original condition