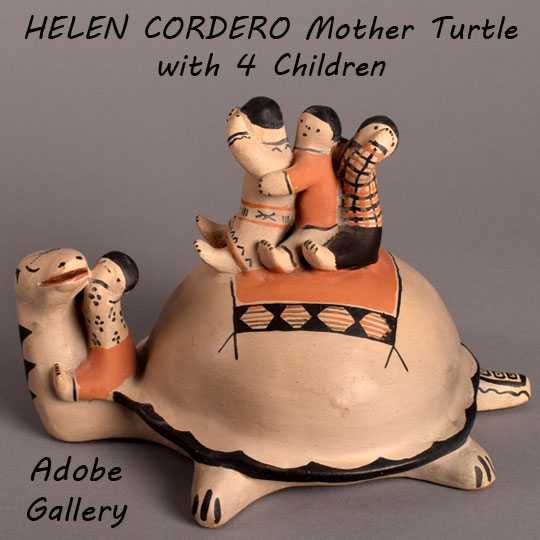 Mother Turtle is giving a ride to five Cochiti children: three boys and one girl.  This Cochiti Pueblo pottery turtle’s head is turned to the left as it checks on the children riding on her shell.  Interestingly, the three children are sitting on a Diné saddle blanket.

The boy clutching the turtle's neck has his hand covering his face as if he is scared to see what is going on.  The young girl in the lead on the turtle’s shell has both eyes closed, the boy behind her is clutching on to her, and the last boy has his hand over his face.

The turtle’s shell is painted black around the lower edge, the tail is painted with  four squares, each with a dot, and a flower is painted on the turtle’s head, a feather hangs down his neck and two bands of black triangles decorate the lower neck.

After Helen Cordero’s children grew up and she had some spare time on her hands, she was encouraged to make pottery to supplement the family income.  She failed miserably at making bowls and jars so she was told to try making figurines.  That is where her talent lay.  She started making figurative pottery and her success is well known.

Cochiti Pueblo artist Helen Cordero [1915-1994] is best known for creating the figurative shape now known as the Pueblo Storyteller figurine that was inspired by memories of her grandfather. She also made a figure of a turtle with children on its back.  The Mother Turtle figurine is inspired by a Cochiti Pueblo legend that refers to a female turtle coming to rescue the children of the pueblo in times of turmoil, danger, or flood.

This Mother Turtle figurine with four children being rescued is a very typical representation of Cordero’s creation.  The turtle figurine is an older one, having been sold by us in 1986 to a client from whom we now have it back to place in another’s collection.  It is in excellent condition.