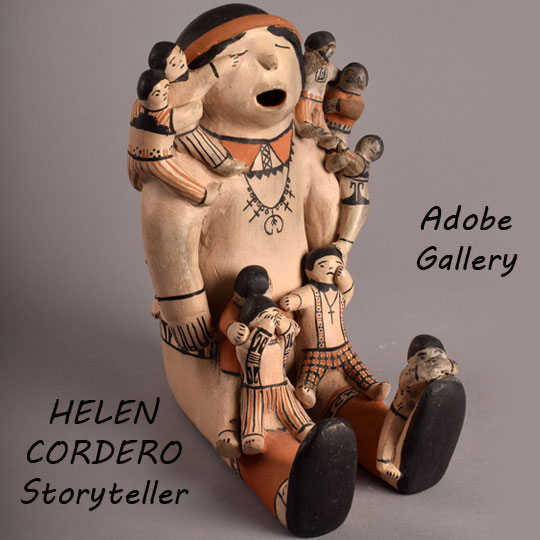 This is a classic pottery storyteller figurine by Cochiti Pueblo artist Helen Cordero from what is considered her best period—the 1970s.  At that time, the adult figurine was slim, as shown here.  Later, she made them more beefy.  In her traditional manner, the male is seated, has his eyes closed and mouth open, wears a headband, is dressed in a collar shirt, has a pueblo cross necklace around his neck, and wears traditional pueblo moccasins.

The 11 children all appear to be boys, and each one is dressed to perfection with painted shirts and elaborate trousers.  Two boys cling to her back, two more on her right shoulder, three on her left shoulder and arm, and two on each leg.  Some have their hands over their eyes.

The figurine is in very good condition.  It was originally purchased in 2000 from Gilbert Ortega in Scottsdale, Arizona, by the family from Denver who is the original and current owner.