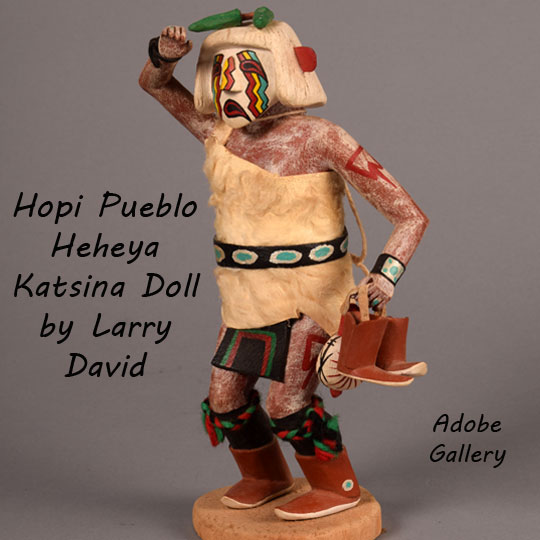 This carving of the Hopi Pueblo Heheya Katsina was made in 1984 by Larry David. He is mostly an all-wood carving with a few items of added clothing—faux leather cape, belt, and loin cloth, and yarn around his legs.  Larry David was a brother of Neil David, Sr.

This carving is an excellent representation of one of the varieties of Heheya, as they differ at each of the mesas.  It was painted with paints that represent those dolls from the mid-twentieth century.  His face carries the colorful markings and the deformed mouth of this katsina.  His hair was carved from wood and there are two green chile mounted on his head.  In his left hand he carries a pair of moccasins and gourd rattle as gifts for a child.  His white face indicates he is the First Mesa Heheya.

"like Heheya" and that version of Heheya appears only in Third Mesa villages. Other versions appear in First Mesa and Second Mesa villages. The interesting thing about this Katsina is that he speaks the opposite of what he means. If he says something is "good," he means it is "bad." Formerly he accompanied the Soyoko when they appeared at Third Mesa but since the Soyoko no longer come, his role is shifting to that of a general Powamu Katsina.

“This katsina is one of the sons of the Ogres.  He is frequently a runner or a slave or servant for the Ogres.  He has been known to threaten the children and to carry food to the kivas where it is stored until evening.  Sometimes he will carry a rope to threaten the children or to lasso an unwary onlooker. He is considered an Ogre when he appears in this way.  When he appears in the night dances, he behaves in a lewd or lecherous manner until one of the Ogre manas (women) puts a stop to it.  The symbols on his arms represent a male penis and testicles.” [Ricks & Anthony, 1991:126]

An informant at the Village of Shungopavi on Second Mesa stated:

“This is just a variation of the Heheya Kachina.  On First Mesa he has a white face, at Second Mesa he has a black face, and at Third Mesa he has a yellow face. He does appear at Shungopavi.  The marks on his arm show that he is lewd and will chase after girls.”

An informant at Old Oraibi on Third Mesa stated:

“He is a side dancer for the Kuwan Heheya group of Kachinas.  The following is a tale concerning the face of this Kachina—The Heheyas were in the village when the village was attacked by an enemy.  The Heheya went into a nearby cave to escape and hide. The enemy saw them and started a fire in the cave and that is why the Kachina’s mouth is deformed and why he has no feathers.  He will often use a chile ristra in the place of his feathers.” [ibid 126]

At Kykotsmovi Village on Third Mesa, the informant added to the story above:

“that the fire made the regular color of the Heheya run, thereby leaving his face with the variety of colors as shown.  This Kachina will act as the carrier of the metate and mano for the corn grinding maidens. At Third Mesa his arms are marked with female genitalia. It is frequently joked that the length of the line on the Kachina’s arm is as long as the impersonator’s penis.”

Provenance: this Hopi Pueblo Heheya Katsina Doll by Larry David (1948-2006) is from the collection of a gentleman from New England