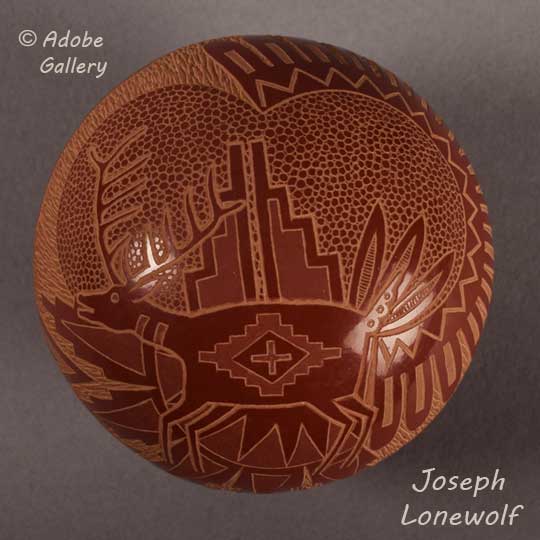 This remarkable seed pot was made in 1976 by Joseph Lonewolf of Santa Clara Pueblo. Those who are familiar with Lonewolf's work will recognize that, at almost three inches in height, this is a large piece by the artist's standards. This expanded size allowed Lonewolf to expand the scale of his remarkable sgraffito-carved designs. Rather than expanding the scene with additional figures, he chose to create an elaborate environment around a single figure.

A single deer with massive antlers appears near the top of the pot, with one antler's tip landing right at the top. A complex composition appears around the deer, with kiva step, cloud, and sun elements arranged in intersecting semicircular patterns. From a distance, this looks like a simple redware piece, but a closer look reveals that a soft rose tone was added in certain areas. It's just a slight variation from the natural red color, which makes it a subtle choice in comparison to the blues and greens the artist often used. As always, the carved designs were executed beautifully. While Lonewolf's works are always great, this example is a standout piece. The bottom of the pot is signed Joseph Lonewolf, marked with the artist's hallmark wolf face, and numbered 115S, and dated 1976.

Provenance: this Joseph Lonewolf Large Seed Pot with Sgraffito Deer Design is from a private collection