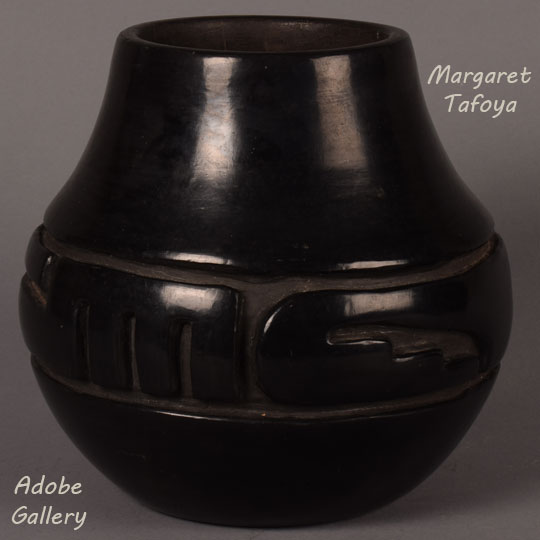 The shape of this jar is lovely and substantial, and the piece is heavily walled to allow for its deep incision of carved geometrics.  A wide mid band holds the carvings, and they feature two repeating motifs.  A generous curve gives way to kiva steps and continues around the jar, sculpted into curves and rectangles.  The incised work is at least a centimeter deep giving the jar a sturdy and long-lasting energy.

This jar could have been red, black, or even the in-between options for the wonderful clay found at Santa Clara Pueblo.  In this case, the artist chose to smother the kiln fire, depriving the clay of oxygen and thus provoking the coveted process of turning the clay from red to black. Furthermore, she polished every part of the vessel but the interior and the face of the carved indentations. Skillfully crafted, this Margaret Tafoya jar could be a centerpiece of any home’s collection of spectacular items.

Margaret Tafoya was considered a master of the art of Santa Clara Pueblo pottery making and made deeply carved blackware and redware vessels which are highly valued by collectors. She was the last of the matriarchs of the early 20th century pueblo potters and well-known for her polished blackware pottery with bear paw designs—a good luck symbol.

Margaret Tafoya (1904 - 2001) Maria Margarita Tafoya - Corn Blossom was born August 13, 1904, at Santa Clara Pueblo. Margaret learned her skills from her parents, Sara Fina Gutierrez Tafoya and Jose Geronimo Tafoya, who were expert potters; some of her pieces were inspired by tales she heard from her parents and grandparents. Margaret and her mother were known for their ability to make unusually large storage jars and water jars. She was married to husband Alcario Tafoya (1900 - 1995).

She believed the secret to her technique was her polishing stones, which had been passed down through the generations. She taught her children (nine kids in total) her pottery-making skills to include: Virginia Ebelacker, Mela Youngblood, Toni Roller, LuAnn Tafoya, and Mary Esther Archuleta.

Margaret had learned to make pottery from her parents and continued a longstanding tradition but added her own innovation to her pieces and family legacy.  It has been said with her deeply carved blackware, like this vessel, she at times had help from her husband, Alcario Tafoya, with the carving which he would do after the pottery had dried overnight in the creation process.

Condition: this Margaret Tafoya jar has a couple very small scratches and is in good condition.

Provenance: this Margaret Tafoya Santa Clara Pueblo Deeply Carved Blackware Jar came from a private collection of a man who lives in Texas and was gifted to him in 1963.