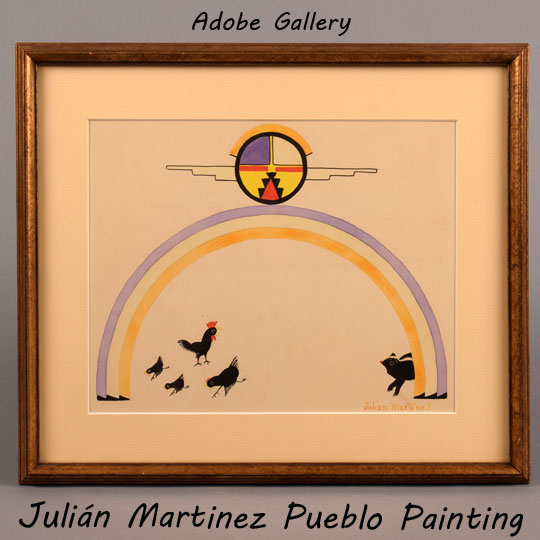 This original painting was created by San Ildefonso Pueblo artist Julián Martinez.  His subject here is a group of animals under a colorful rainbow.  On the right side, a wide-eyed skunk peeks out from behind the foot of the rainbow.  On the left side, a family of chickens flees the scene.  The mother hen protects the two chicks as the rooster stands and faces the skunk.

Julián Martinez’ work here is excellent. One cannot help but be enchanted by the chicks and their protective parents.  The skunk—a favorite subject of Martinez’ that appears often in his work—is charmingly animated.  The rainbow uses three bands of soft pastel color to frame the animals’ interaction.  Up above, a stylish sun face design with inverted kiva steps completes the image.  The painting’s subject matter is whimsical and appealing, and the way it is executed is stylish and well-balanced.

The painting is signed Julian Martinez in lower right.  It is framed under an off-white mat in a carved, gold-stained frame.

Condition: very good condition.  A few very small imperfections in the paper, which is typical for works from this period.

Provenance:  from the collection of a Canadian man who inherited it from his parents.  They were "avid tourists in the Southwest in the early part of the 20th century".  They acquired the painting during one of their trips; exactly where and when is unknown.

Recommended Reading: NATIVE AMERICAN PAINTING - Selections from the Museum of the American Indian by David M. Fawcett and Lee A. Collander