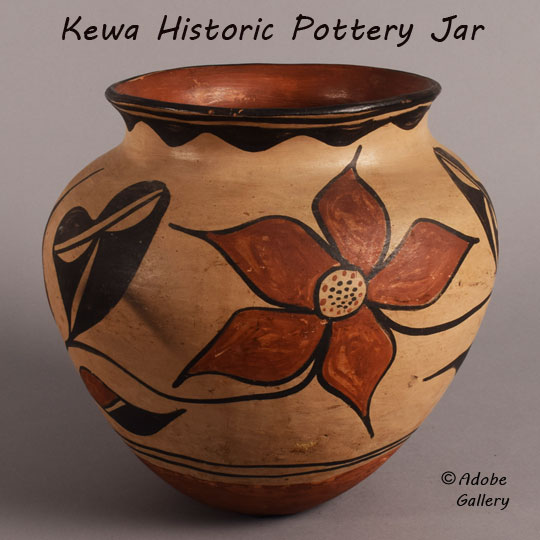 This polychrome jar was created by an unknown Kewa Pueblo potter. It has an interesting and slightly unusual shape. With its high shoulder, shortened neck, and wide rim, we would describe it as similar to that of a traditional olla but with some vase-like attributes. It's an appealing shape that does not deviate too dramatically from that which is common at Kewa.

The designs are similar in that they feel expressive without veering too far from tradition. A single design band occupies most of the jar's exterior, with gentle rain clouds marking the top and the typical red-slipped base framing the bottom. Horizontal lines with ceremonial breaks appear at the top and bottom as well. Within these borders, a garden blooms in black and red, planting roots twice on opposite ends of the jar as clusters of leaves emerge.

Long stems wind outward to reach large red flowers, which also appear on opposite sides of the jar. Interestingly, each flower is fed by two stems, which makes the design into a continuous, unbroken pattern. This is a wonderful example of Kewa pottery.

Condition: good condition, some abrasions around base and rim from handling and use. Examination under a blacklight shows no evidence of repair or restoration.