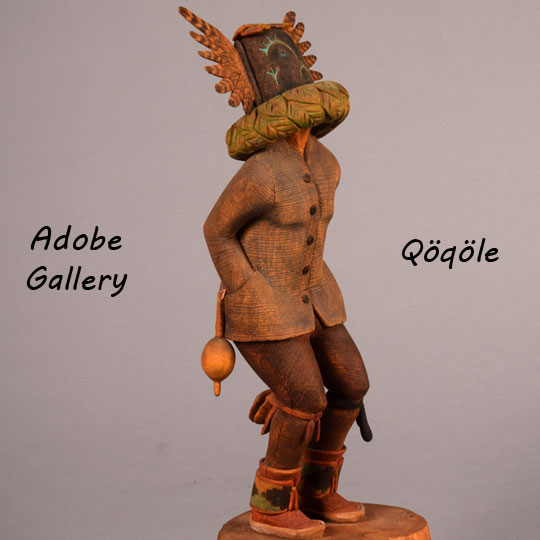 The doll was carved from a single piece of cottonwood root except for minor add-ons such as wings, rattle, and leg adornments, plus the pedestal. The doll has been colored with oil-based stains. The body proportions were executed to perfection.  The katsina doll is dressed in Anglo clothing, has a gourd rattle on its backside, and a turtle rattle on one leg.  The carver’s name was etched on the underside as K M Fred.

Representation of Katsinas differs at different Mesas.  At Third Mesa villages, Qöqöle wears old Anglo clothing.  At the Second Mesa, he wears the traditional buckskin clothing. The Third Mesa Qöqöle may have worn buckskin in the distant past, but no longer.

Third Mesa is the only place where Qöqöle appears during Soyal.  He comes in a large group of Qöqöle and their manas, on the last day of the ceremony. Combining ritual with pleasure, they burlesque other ceremonies while at the same time managing to “open” the kivas.  It is possible that at one moment the katsina may be very seriously marking the four sides of the kivas to allow the other katsinas to come and visit the village, and at the next moment be kneeling on the ground to shoot marbles.  Frequently they imitate the women’s dances of the preceding fall.

The Qöqöle Katsina may appear with a black face with blue markings, as in this example, although he can appear in any color because he is a directional katsina.  His face can be any of the colors of the six directions.

Alph Secakuku, Hopi author of Following the Sun and Moon, states the following: “Tuvatsqöqlo appears during Powamuya ceremony, bringing gifts of bean sprouts and colorful gifts for the children.  The Qöqlo family come in various colors representing the six directions (north, west, south, east, universe, and the underworld).  The Black Qoqlo talk 'backwards'—the nature of their speech has the opposite meaning.  If they say 'It's not a good day,' they actually mean that it is a beautiful and pleasant day." [Secakuku, 1995:21]

Malcolm Fred is a Hopi Indian of the Greasewood and Roadrunner Clans. He was born in 1960 and has been an active carver of katsina dolls since the 1970s.  He lives on the Hopi Reservation on the Third Mesa Village of Bacavi in Arizona.

“Malcolm Fred explained his feelings about carving: ‘There are pieces of wood that really do speak to me as to what they want to be carved.  That is the spirit that gives me the idea of what to make.  When I am about done, the doll wakes up and sometimes when I am carving I feel that the doll is moving . . .I hope that the Katsinas will never be forgotten, and the carvers must not forget to have the elders of the village give them good advice . . .The carvers must not forget about their culture.’” [Schaaf, 2008:94]

Provenance: this Malcolm Fred Hopi Pueblo Traditional Qöqöle Katsina Doll with Anglo Clothing is from the estate of a family from New Mexico