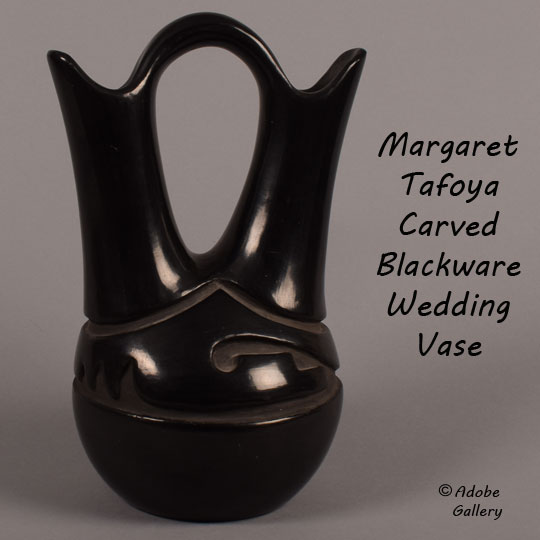 This exquisitely carved blackware wedding vase was made by matriarch Margaret Tafoya of Santa Clara Pueblo. It's a fine example of this particular form, made by one of the most important pueblo pottery matriarchs. Its rounded base holds two tall spouts, which are linked by an arch. A wide, flat base allows the piece to stand on a flat surface. The vase is polished beautifully, which is typical of Tafoya's work but always worth taking a moment to admire.

Two carved bands circle the vase's exterior. The upper band circles around the base of each spout, forming symmetrical C shapes, which adjoin at their ends. The lower band is a horizontal line resting just above the vase's widest point. Carved designs rise from this band, adding movement and energy to the area in between the two bands. At just under ten inches in height, the piece is modestly scaled, but it has a powerful presence, nonetheless. This is a wonderful example of Santa Clara Pueblo carved blackware from the artist who perfected the style.

The bottom of the vase is signed Margaret.

Margaret Tafoya (1904 - 2001) Corn Blossom was born August 13, 1904, at Santa Clara Pueblo. Margaret learned her skills from her parents, Sara Fina Gutierrez Tafoya and Jose Geronimo Tafoya, who were expert potters. Margaret and her mother were known for their ability to make unusually large storage jars and water jars. She believed the secret to her technique were her polishing stones, which had been passed down through the generations. She taught many of her nine children how to make pottery. Virginia Ebelacker, Mela Youngblood, Toni Roller, LuAnn Tafoya, and Esther Archuleta are among the long list of Tafoya's descendants who are or were successful potters. In 1985, Tafoya was one of three New Mexicans selected to receive the Governor's Award, New Mexico's highest artistic honor, awarded for a major contribution to the arts of New Mexico. Her works are included in prominent museum collections worldwide, and she is often listed among the most influential Native artists.

Adobe Gallery Blog: What is the Purpose of a Wedding Vase?

Provenance: this Margaret Tafoya Carved Blackware Wedding Vase is from a private collection