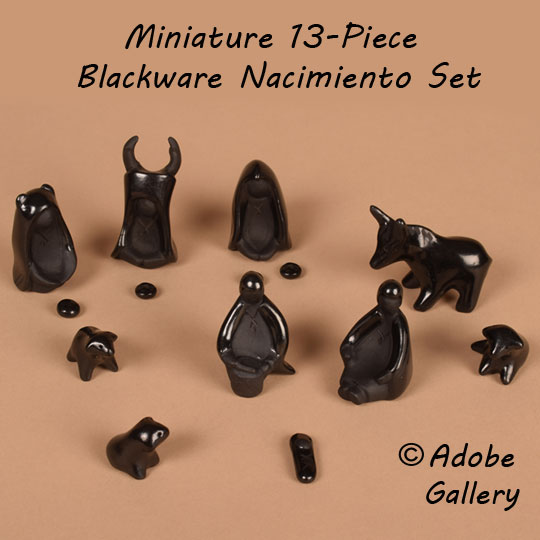 This lovely nacimiento set was made in 1988 by Linda Jo'Povi Askan. Including the three tiny disc-shaped gifts, the set includes thirteen pieces. The set includes Mary, Joseph, Jesus, three kings with separate individual gifts, and four animals. The humans' robes are polished, and their interior sections have a matte finish. The three kings' traditional gifts of gold, frankincense, and myrrh are represented here by three tiny pots. These tiny pots are not attached to the figures but rest comfortably within their hands. Similarly, Jesus is also a separate figurine but rests in the hands of either Joseph or Mary (see images below). Linda Askan's work with these miniature clay figures is excellent. Each figure was shaped beautifully and polished skillfully. There is an elegance to this set that will appeal to many, regardless of their level of connection to the scene being depicted. This is an excellent example of the pueblo Nacimiento tradition but at a very small scale. Here attention to every detail is amazing.

Linda Jo'Povi Askan (1954- ) Cactus Flower is a potter of Santa Clara Pueblo and Diné of the Navajo Nation descent. Linda attended the Institute of American Indian Arts after graduating from Espanola High School. She began potting in 1984 and was taught her craft by her mother and grandmother. She makes traditional red and black Santa Clara pottery, as well as various types of figurines.