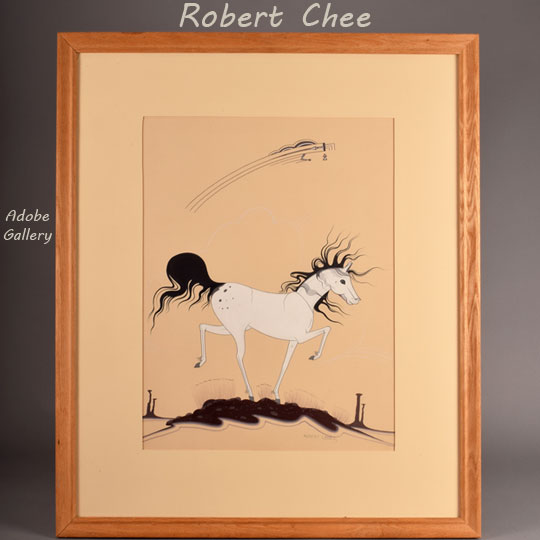 This charming Diné painting was made by Robert Chee.  Chee’s life was very short, but the frequency with which his works come to us suggests that he was quite prolific.  His paintings have been quite popular with our clientele, and we’re always happy to handle them.  Chee’s paintings are classic Diné images in every way, and they possess a unique charm that remains consistent throughout his body of work.  This piece, which is larger than those we’ve seen in the past, is particularly enchanting.

This painting takes one of Robert Chee and his peers’ favorite subjects and blows it up into a larger scale.  It features a pony bounding along the arid hills of the Navajo Nation.  The pony is expertly crafted and full of personality.  As far as its surroundings go, little in the way of detail is included, which is exactly what we expect of a work in this style.  The hill is covered in rocks and plants, and a few small formations are visible in the distance.  A single cloud is visible behind the pony, and a Yei figure passes overhead.  Chee’s color palette is minimal, and this restraint serves the image well.  It’s black and white, essentially, with touches of various shades of gray.  Chee’s work with this Diné pony is delightful.

The painting is signed Robert Chee in lower right.  It is framed under a wide white mat in a simple wood frame.

Provenance: this Original Painting of Horse and Yei Figure by Robert Chee is from a private Colorado collection

The World of Flower Blue [SOLD]
by Margaret Cesa