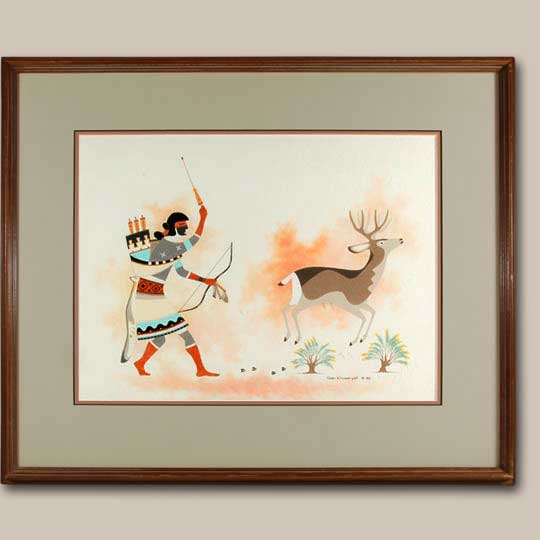 It is rare to see a hunt scene from a San Juan Pueblo artist.  Diné artists seem to have favored hunt scenes, but theirs were quite different than this.  Theirs were very realistic and occasionally violent.  This painting by Robert Montoya is as gentle as a hunt scene could be.  Clouds of bright orange decorate the hunter and animal's surroundings, adding to the painting's dreamlike feel.  It is always a treat to see a unique, personalized twist on the traditional pueblo style.

This painting was created by Ohkay Owingeh Pueblo artist and achitect Robert Montoya.  With this piece, the artist presents a unique, modern variation of the traditional pueblo "flat" style.  Montoya's human figure is dressed in ceremonial clothing and pictured in profile, which aligns with what we'd expect of a traditional painting.  The composition style varies from tradition, as the figure is formed out of blocks of color rather than defined by thin, bold outlines.  The deer is similarly composed.

Robert Montoya was born in 1947, and is the son of Ohkay Owingeh painter and former Santa Fe Indian School art department head, Gerónima Cruz Montoya. Mrs. Montoya began her teaching career as assistant to Dorothy Dunn. Robert Montoya has multiple degrees in architecture and also has experience as an architect.  He resides at Sandia Pueblo. Robert is not a prolific painter, as his career in architecture occupies most of his time.

The Original San Juan Pueblo Painting of a Deer Hunter and Deer by Robert Montoya  is signed in lower right with the artist’s native name and dated 8-89.  It is properly framed and in original condition.

Provenance: from the collection of a family from upstate New York 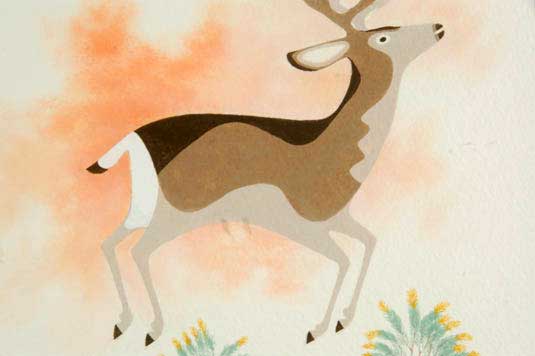